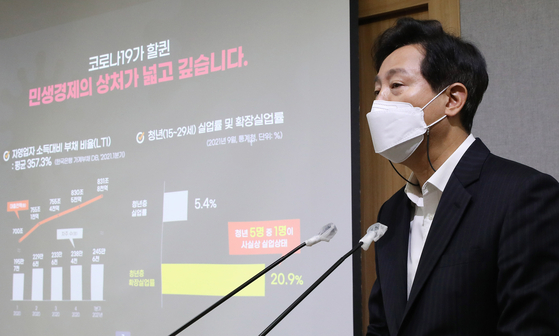 Seoul Mayor Oh Se-hoon speaks during a press briefing on the city budget for 2022 at Seoul City Hall in Jung District, central Seoul, on Monday. [NEWS1]

“We have set aside a record high budget so that the city finances can be used to the benefit of citizens' lives even under difficult conditions,” Seoul Mayor Oh Se-hoon said.

The proposed budget marked a 9.8 percent on-year increase from this year’s 40.15-trillion-won budget, which was also a record at the time as it passed 40 trillion won.

The Seoul Metropolitan Government committed much of its budget to three areas: recovery of public welfare and daily life; strengthening the social safety net; and growth.

Meanwhile, the budget for projects undertaken by late Mayor Park Won-soon, such as a financial support system for civic groups and residents’ associations, was cut by 40 to 90 percent.

Seoul City has already announced a massive audit, claiming that certain civic groups are monopolizing private consignment projects. In particular, Mayor Oh drew opposition from civic groups by saying that Seoul has “degenerated into a cash machine” for civic groups.

During a press briefing on the budget, Oh said the decisions were made to “reduce the preferential budget focused on specific civic groups and use it to improve the quality of life of many citizens.”

He added, “I can't justify correcting the wrong practices as removing [the traces of] the former mayor, denying coordination with citizens and even destructing democracy.”

The Seoul Metropolitan Government also set next year's contributions to traffic radio station TBS at 25.2 billion won, down about 12.3 billion won from this year. TBS, which started as a transportation broadcasting headquarters under the Seoul Metropolitan Government in 1990, formed a separate foundation in February last year and became independent but more than 70 percent of its total income relies on Seoul City’s contributions. The station's major radio program, News Factory, hosted by outspoken liberal Kim Ou-joon, has been caught in controversy due to the host's political bias.


The Seoul Metropolitan Government's budget for next year will be finalized after deliberation by the Seoul City Council. The process is not expected to be smooth as the council strongly opposed the budget-cutting for civic group-related projects and TBS financial support, calling it an attempt to “erase the traces of Park Won-soon.”

Currently, 99 seats out of the total 110 seats of the Seoul City Council are from the ruling Democratic Party.