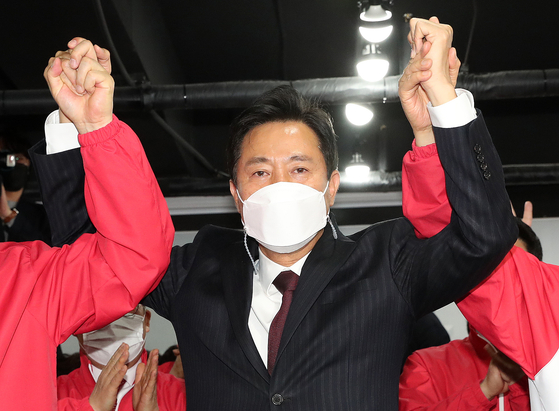 
Former Seoul Mayor Oh Se-hoon is expected to return to City Hall after a crucial by-election for the nation’s capital city, according to an exit poll announced by major broadcasters on Wednesday.

By-elections took place in 21 places nationwide including Seoul and the second largest city of Busan. According to a joint exit poll by three major broadcasters -- KBS, MBC and SBS -- the opposition People Power Party (PPP) was expected to win both mayoral races in Seoul and Busan.

"I thank the voters for enthusiastic support that allowed me to have high hopes as I waited for the ballots to be counted," Oh said from PPP headquarters shortly after the exit poll was announced.

In Busan mayoral race, Park Heong-joon of the PPP scored 64 percent and the DP’s Kim Young-choon 33 percent in the exit poll.

Wednesday’s by-elections are considered crucial political tests of the DP and PPP ahead of next year’s presidential election. The two mayoral vacancies were created due to sexual harassment scandals involving the mayors, both DP politicians.

Voters cast ballots from 6 a.m. till 8 p.m. on Wednesday. Early voting for the by-elections also took place on Friday and Saturday. The early voting turnout across the country was 20.54 percent, the highest ever in the history of a by-election.

The PPP’s Oh, a lawyer who started his political career with a legislative election win in 2000, was elected Seoul mayor in 2006 and re-elected in 2010. He stepped down in August 2011 after a referendum on a plan to offer free school lunches to only 30 percent of Seoul's students, not all. The turnout for the referendum was below the legal minimum quorum, leading him to resign.

Park Won-soon won the mayoral by-election that followed in October 2011. He was reelected in 2014 and 2018, but committed suicide last July after his former secretary filed a complaint against him for sexual molestation.

After stepping down as mayor, Oh was a visiting fellow at King’s College London, and also conducted city governance lectures in Britain, China and Peru. He attempted a return to politics by running in the 2016 legislative election to represent Seoul's Jongno District. He was defeated by Chung Sye-kyun, currently prime minister.

In the general election last April, Oh ran against Ko Min-jung of the DP, former spokeswoman for President Moon Jae-in. He was defeated by 2.4 percent, and political observers said Oh’s political career had come to an end.

But he declared a bid for the Seoul mayoral by-election in January and won the PPP’s primary. On March 23, just two weeks before the election, he defeated Ahn Cheol-soo, a former presidential candidate and head of the centrist People’s Party, in public opinion polls to become the sole conservative candidate.

Oh’s victory against DP rival Park, former startups minister for the Moon administration, was expected. He was a clear frontrunner in polls for weeks. 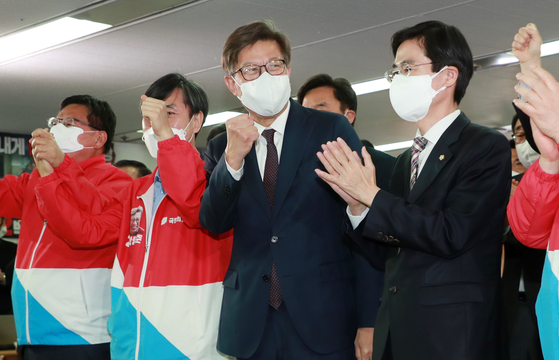 It was the second time that Park was elected to public office since his legislative election victory in Suyeong District of Busan in 2004. At the time, he won the seat as a candidate from the Grand National Party, the predecessor of the PPP.

Park is a well-known associate of former President Lee Myung-bak. He served as senior political affairs secretary in the Lee Blue House from 2009 to 2010. He also served as special advisor to Lee for social affairs in 2011.

From 2014 to 2016, Park served as secretary-general of the National Assembly secretariat. He is also a professor at the Graduate School for International Studies at Dong-A University in Busan.