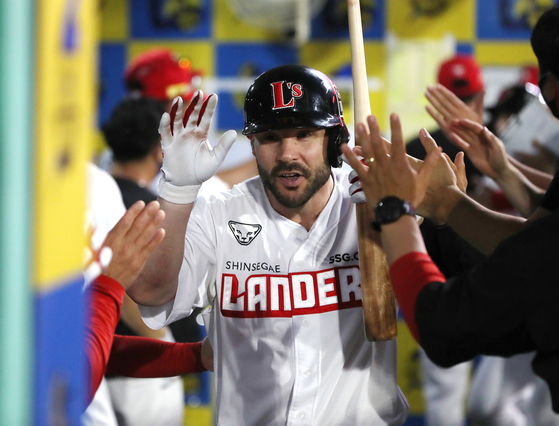 Jamie Romak celebrates with his teammates after hitting a two-run home run against the LG Twins at Incheon SSG Landers Field on June 23. [NEWS1]


SSG Landers legend Jamie Romak announced his retirement last week, ending a five-season career with the Incheon club that saw him rise to become one of the most successful foreign hitters ever to play in the KBO and a fan favorite for his behavior both on and off the field.

The Landers announced over the weekend that 36-year-old Romak decided to retire at the end of 2021 season, ending a career that spanned three of the biggest baseball leagues in the world, with stints at the Los Angeles Dodgers, Arizona Diamondbacks, Yokohoma DeNA BayStars and the Landers.

In five years in the KBO, Romak batted .273 with 155 home runs and 409 RBIs in 626 games, putting him at third on the all-time KBO home run ranking for foreign players.

Romak joined the Landers, named the SK Wyverns for the first four years of his career here, in 2017, batting .242 in his first year with 31 home runs. In 2018 Romak was explosive at the plate, batting .316 with 43 home runs. The Wyverns won the Korean Series that year, with Romak hitting two home runs in the series.

Things were quieter for the Canadian slugger this year, with injuries disrupting his season. He missed the final few games with a neck injury, but continued to travel with the team.

On Saturday the Landers missed out on a spot in the playoffs after losing to the KT Wiz in the final game of the season, but still held a ceremony for Romak's retirement in the clubhouse after the game.

Off the field Romak also made a name for himself in Incheon, giving up his own time to support projects in the local community. He also made an effort to get to know fans and wasn't afraid of having some fun at his own expense.

Romak's success with the Landers earned him accolades both at home and abroad. Last year, Romak was awarded the James "Tip" O'Neill Award, the top honor that the Canadian Baseball Hall of Fame has to offer.

The award recognizes one player each year who has "excelled in individual achievement and team contribution while adhering to baseball’s highest ideals." Romak was chosen for his success in Korea over Canadian major leaguers including Tyler O’Neill of the St. Louis Cardinals, Joey Votto of the Cincinnati Reds and Jordan Romano of the Toronto Blue Jays.

Rather than retiring Romak's No. 27, the Landers announced Sunday that they will honor his career and his commitment to the club by keeping the number alive and awarding it to the next foreign player to join the club.