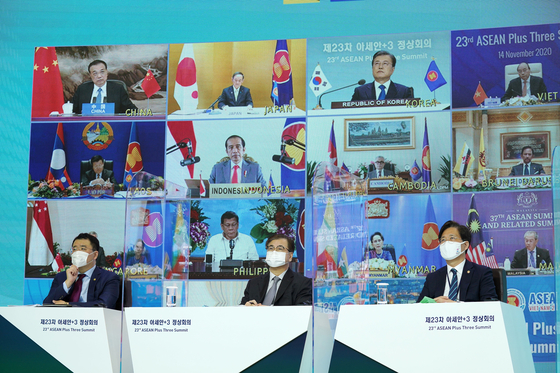 
The Campus Asia, a cross-border student mobility program among Korea, Japan and China, has been expanded to include Southeast Asian countries and designated 20 project groups, education authorities said Tuesday.

Campus Asia (Collective Action for Mobility Program of University Students in Asia) was first proposed at the Korea-Japan-China summit in 2010 and was launched as an educational collaboration project to train a new generation of leaders in Asia, much like the Erasmus program in Europe. Since 2011, total of 6,625 students have participated, and 497 people have obtained dual degrees under the program.

The Education Ministry and the Korean Council for University Education announced Tuesday that starting this year, three Asean countries will participate, under a new name: Campus Asia Plus. The countries joining are Singapore, Malaysia and Laos.

The authorities said Korea, Japan and China have singled out 20 project groups for the program after undergoing reviews.

Some programs include more than five schools and countries.

Selected universities will receive an average of 120 million won ($102,000) per year for program operation costs until 2026. In addition, exchange students participating in the program may receive accommodation expenses, settlement support and emergency assistance expenses.

“Due to the Covid-19 pandemic, strengthening educational cooperation and people-to-people exchanges between Korea, Japan and China and Asean have become more important,” said Vice Minister of Education Jung Jong-chul, vowing to actively support the program to nurture international talents who will lead the future society.

More students are dropping out for a hopefully better future