Apps struggle to weed out the gapjil for online reviews

Apps struggle to weed out the gapjil for online reviews 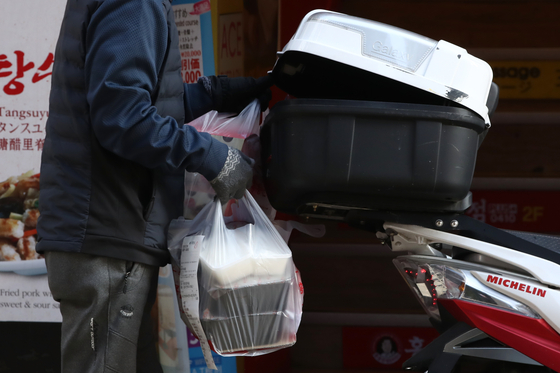 A delivery rider delivers food on a motorcycle. [YONHAP]


Food delivery applications are trying to crack down on troll reviews without overly censoring opinions, and it's not an easy task.

Companies have been pumping out rules to protect businesses since a malicious review on Coupang Eats was said to have contributed to the tragic death of a restaurant owner in June.

The People's Solidarity for Participatory Democracy, an independent activist group, said the customer demanded a refund for a fried shrimp dish by verbally abusing the restaurant owner via phone and leaving a one-star rating out of five stars.

The owner, who was in her 50s, died from a brain hemorrhage.

Coupang Eats implemented a line of corrective measures following the incident, including the so-called anti-gapjil plan that went into effect October. Gapjil is a Korean word that roughly means abuse of power.

Reviews with swear words, sexual comments and malicious comments are now blocked by the company. Ratings from such users are excluded when calculating the restaurant's average star rating. If the same user continues to leave malicious comments, the account is permanently suspended.

On Baedal Minjok starting in August, restaurant owners could report reviews if they considered them to be malicious. Once reported, the review is temporarily invisible to other users for a month. The customer then has to choose whether they want to leave the review up or entirely delete it after the month has passed.

Customers have been complaining that they are being censored.

On Nate Pann, an online forum, an anonymous user uploaded a post on Aug. 29 expressing anger about Baedal Minjok's policy.

The user left a review on the delivery app after ordering malatang, a soup-based dish that involves customers picking their own ingredients to boil in the broth. According to the post, the review was hidden for a month via a request from the restaurant, although the user claims the criticism was valid.

"Is the crab meat supposed to be cooked with the plastic wrapper..?," read the review provided via a screen grab. "I saw a stiff piece of plastic in the corner when I opened [the food], so I took it out, and was startled because a big wrapper came out."

The user decided to leave the review on the application after the temporary one-month block.

"The review will be up again after 30 days because I didn't agree to delete it, but I guess this is how negative reviews are pushed down since new reviews will pile up during the extra time," wrote the reviewer.

"The restaurant owners are not the ones that have full authority to hide the reviews," said the Woowa Brothers spokesperson. "After they report it to us, we hide it when we consider the review to possibly cause harm to or defame the restaurant owner."

The one-month period was designated to allow enough time for the restaurant owner and customer to talk it out. During the given time, Woowa Brothers acts as an intermediary by facilitating communication between the user and restaurant owner.

A spokesperson for Coupang Eats said it monitors reviews based on the Act on Promotion of Information and Communications Network Utilization and Information Protection, etc and related laws.

Naver disabled the rating function starting Oct. 29 and announced it will show existing ratings only until January next year. The company doesn't operate a food delivery app, but users can leave reviews for businesses registered on Naver Map.

An alternative system introduced by the company is the "keyword review." Customers can choose from a list of positive descriptive phrases, such as "the dessert tastes nice," "it's easy to park," or "the staff is kind" that most closely describe their experience at the venue. Most frequently chosen keywords are listed with the restaurant information. 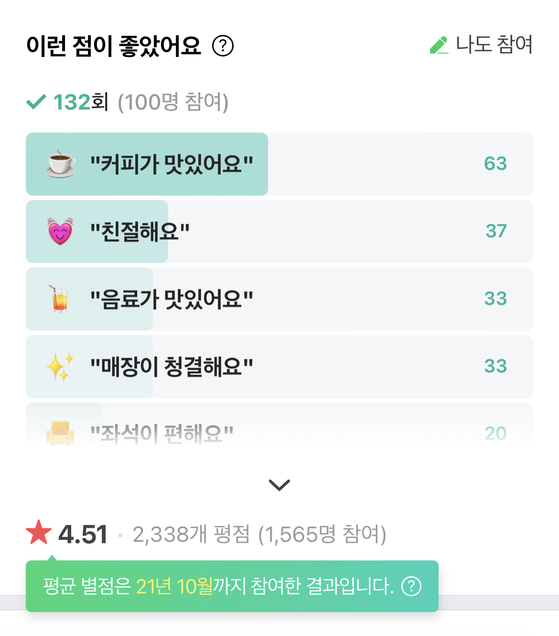 A screen grab shows Naver's new keyword review system. Phrases that say "the coffee tastes nice" and "the staff is kind" are the top two descriptors for the cafe. A notice that reads "average star-ratings show figures compiled through October 2021" is shown below the restaurant's star-rating. [SCREEN CAPTURE]


There are no negative keywords to choose from.

A spokesperson for the company said customers can still leave text reviews, which users can use to check what others didn't like about the restaurant.

"Rather than saying users won't be able to see downsides of the venue, its more accurate to say we made the quantitative aspects more straightforward to understand," said a spokesperson for Naver. "It was hard for people to understand customers' intentions behind quantitative star ratings, and we just made it more intuitive."

Customers on Naver won't be entirely forced to hold their tongues if they wish to leave complaints.

A function for users to leave reviews only visible to business owners will be implemented by the second half of 2022, providing room for customers to leave criticism without affecting potential sales of the restaurants.

Lee Eun-hee, a consumer studies professor at Inha University, says that abolishing parts of the review system or taking away information from the customers is inadvisable.

"Food is a type of experience good, which people have to experience in advance to know what it's like," said Professor Lee. "There is a higher possibility of people choosing foods that they haven't experienced due to the internet, but it's hard to decide just with photos and information provided by the supplier."

"People tend to trust photos and information provided by other fellow consumers, and abolishing the review system will be detrimental."

Lee added that allowing customers and business owners to evaluate each other could be a possible solution, just like Uber does in the United States. Not only does the passenger rate the driver after an Uber ride, but the driver also rates the passenger.

With the two-way rating system, people will be able to immediately identify a troll review.

The Korea Communications Commission (KCC) has been mapping out guidelines since July to both protect the restaurant owners and ensure that consumers benefit from the review system.

The guidelines will introduce a set of voluntary rules for delivery app companies to follow.

"We've been trying to establish guidelines that will be beneficial for both parties, and the guidelines are expected to be announced sometime at the end of year," said a spokesperson for KCC.

Stay in and order takeout