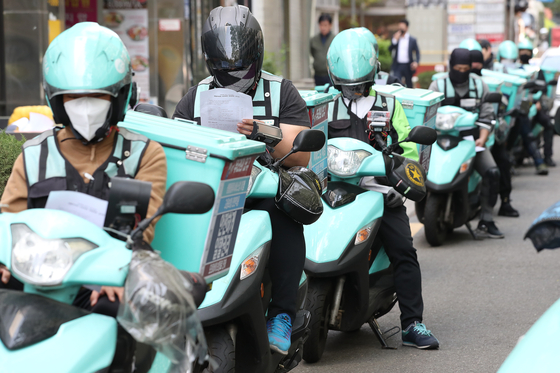 Baedal Minjok (Baemin) food delivery riders in Yeouido,western Seoul, on May 1. The acquisition of Baemin to Germany's Delivery Hero has again raised concern over the online platform's dominance. [YONHAP]


The Fair Trade Commission (FTC) on Monday said it has launched a task force that will set out more stringent antitrust regulations for online platform operators such as Naver and the food delivery app giant Baedal Minjok, or Baemin.

The antitrust agency said the standard will be created by next year with the task force holding a meeting every month until November.

The task force will be co-headed by Korea University law professor Lee Hwang and the agency’s secretary general Kim Jae-shin.

The FTC said in a statement that it has been limited in judging antitrust violations committed by online platform operators as current regulations assume a one-sided market structure, while online platform businesses are “two-sided.”

Under the current one-sided structure, antitrust violations can be easily determined by judging the impact on consumers through actions such as raising prices.

This standard can't be applied to online platform businesses, which only connect businesses with customers, and generally do so without any fees at the consumer end.

The FTC said it is also difficult to determine whether new strategies such as self-preferencing, preventing multi-homing and the most favored nation (MFN) clause adopted by platform operators are appropriate practices.

Self-preferencing is when a platform operator prioritizes its own services over competing businesses using its platform, like ensuring its own goods and services are always shown at the top of search results. Preventing multi-homing refers to the practice of stopping customers from accessing different platforms at the same time, while the MFN clause prevents suppliers from offering better prices on other sales channels or forces them to offer cheaper prices on the online platform.

While such online platform businesses have been expanding aggressively in recent years, there have been growing concerns that existing regulations have failed to adapt to the changing environment.

While the acquisition has not been approved by the FTC yet, there have been growing monopoly concerns as Delivery Hero also owns the second and third largest food delivery platforms in Korea.

In April, Baemin had to scrap a controversial revision to its app that affected how much exposure restaurants get just 10 days after it was announced.

The proposed revision drew strong backlash from restaurant owners that felt that Baemin was trying to profit from its dominance over the food delivery market, especially at a time when small businesses have been struggling due to the coronavirus pandemic.

Baedal Minjok races to keep up with rivals for grocery deliveries