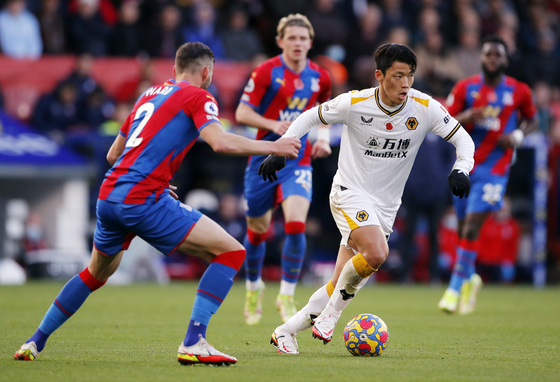 
Wolverhampton Wanderers fans debuted a new chant in honor of Korean striker Hwang Hee-chan during a game against Crystal Palace at Selhurst Park in London on Saturday.

The chant, to the tune of "She's Electric" by British band Oasis, references Hwang's loan status with the club and his impressive start to the season with the lyrics, "He's Korean; He's only on loan for a season; We all think that he's brilliant; He's Hwang Hee-chan."

Having a chant written for you is considered an honor in British football, although it can be a double-edged sword. Former Manchester United player Park Ji-sung was greeted for years with a song that referenced the racist stereotype that Koreans eat dogs, even though the chant was supposed to be celebrating him as a player.

Hwang's new chant avoids any unpleasant references and appears to already be a hit, with thousands of fans heard singing it in the stands on Saturday.

Hwang joined Wolves this summer on loan for a year and has already scored four goals in eight Premier League appearances with the club, including in his opening game.

But fans may soon have to update their chant, as the club is reportedly already in talks to buy Hwang outright, ending the loan deal and making him a permanent addition to the Wolves roster.

Wolves lost Saturday's game against Crystal Palace 2-0, snapping a five-game streak without a loss that had lasted since a Carabao Cup game on Sept. 23.

The Premier League will now pause for an international break, with Hwang set to return to Korea to join the Taeguk Warriors for two qualifiers for the 2022 Qatar World Cup.

Korea will first take on the United Arab Emirates on Thursday, before flying to Qatar to face Iraq on Nov. 16.