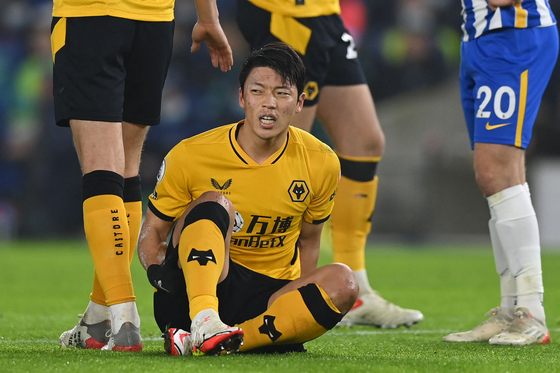 Wolverhampton Wanderers' striker Hwang Hee-chan sits up after getting injured during a Premier League match against Brighton at the American Express Community Stadium in Brighton, England on Dec. 15. [AFP/YONHAP]


Wolverhampton Wanderers striker Hwang Hee-chan will not be seen on the pitch until February according to the club's injury list posted on Monday.

“Hee Chan Hwang sustained a hamstring injury in the win over Brighton and is expected to return to play in February,” read the Wolverhampton injury list.

Hwang suffered an injury on Dec. 15 in the early stages of a Premier League clash with Brighton. Hwang left the pitch in the 12th minute of the game after a collision with Brighton full-back Tariq Lamptey. Brighton were awarded a free kick, and Hwang attempted to continue playing but left the pitch moments later, grabbing his thigh.

After a dramatic arrival in the Premier League in September, Hwang has been going through an offensive cold snap in recent games. Hwang's short appearance on Dec. 15 marks his seventh straight game without a goal, a disappointing statistic for a player who scored four times in his first six games.

The dry spell also comes at a bad time for Hwang's career, with the January transfer window now just a few days away. Hwang joined Wolves on loan for the season, with the club reportedly maintaining the option to buy Hwang for around £13 million ($19 million), and it quickly became apparent that a more permanent offer would likely be on the table in January. A goalless run and an injury immediately before talks begin certainly won't give the impression that Hwang was hoping for. 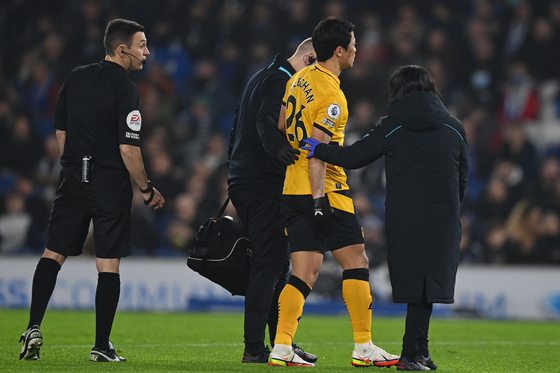 Wolverhampton Wanderers' striker Hwang Hee-chan is helped out of the pitch after picking up an injury during a Premier League match against Brighton at the American Express Community Stadium in Brighton, England, on Dec.15. [AFP/YONHAP]


The Wolves are currently believed to be missing at least 10 players: the injury announcement states that the club has six confirmed Covid-19 cases.

The other four players were out for injuries, but some will soon be returning to the pitch. Rayan Ait-Nouri suffered a groin injury that kept him out of the Brighton & Hove Albion versus Chelsea match but will shortly rejoin the team. Willy Boly suffered a calf injury and is currently rehabilitating, and Yerson Mosquera suffered a long-term hamstring injury but was recently cleared of Covid-19 and will return to training.

Wolves’ next scheduled game is against Manchester United at Old Trafford on Monday.