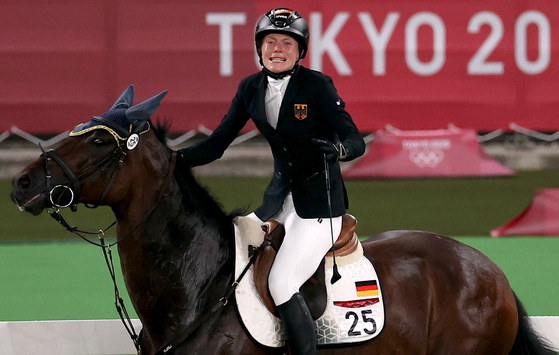 Annika Schleu of Germany reacts before being eliminated in the women's modern pentathlon at the 2020 Tokyo Olympics in Tokyo on Aug. 6. [REUTERS/YONHAP]


The 2024 Paris Olympics will be the last to feature horses in the modern pentathlon, one of the oldest disciplines of the modern games originally defined to test the mettle of cavalry soldiers.


The Union Internationale de Pentathlon Moderne (UIPM), modern pentathlon's governing body, announced last week that a decision had been made to replace the riding section of modern pentathlon, which typically consists of fencing, swimming, riding, shooting and running, with a new fifth sport.

The decision was reportedly taken after issues at the 2020 Tokyo Olympics where multiple athletes struggled to control their randomly assigned horses, culminating in a German coach appearing to punch a horse when it wouldn't jump over a fence.

"The decision to replace riding comes after our UIPM Executive Board endorsed a series of recommendations made by the UIPM Innovation Commission after a two-day meeting in Monaco last week," the UIPM confirmed in a statement on Thursday.

Initial reports suggested that the UIPM had decided to replace riding with a cycling event, although the governing body has since said that no decision has been taken on the new fifth sport, promising to consult with athletes first.

Modern pentathlon is one of the original modern Olympics events. The sport is based on five skills that were considered the core skills a cavalry officer needed: Fencing, swimming, horseback riding, pistol shooting and cross-country running, the last two of which are now combined into one final round, the laser-run.

Interest in modern pentathlon has been on the rise in Korea recently.

At the 2020 Tokyo Olympics, Jun Woong-tae became Korea's first ever modern pentathlon medalist, winning bronze in the men's event. Jung Jin-hwa just missed the podium in the same event, finishing fourth, while a day earlier, Kim Se-hee finished 11th in the women's event, tying what, at the time, was the Korean record.