The author is a professor of mechanical engineering at Pusan National University.


Glasgow, where the United Nations Climate Change Conference (COP26) is being held, is deeply connected to the history of energy. It’s the very place where James Watt (1736-1819) helped open the gate to an industrial society over 250 years ago by dramatically enhancing the steam engine when he worked as a mechanical engineer at the University of Glasgow. It is an irony that the port city, arguably the origin of the Industrial Revolution, became a venue for an international conference to end the carbon-based society today.

The whole world has reached a consensus on the need to achieve carbon neutrality by reducing net emissions of green gas by 2050 to effectively respond to the climate crisis. To achieve the goal, all countries must dramatically cut the emissions. COP26 offered a venue for more than 120 countries to announce their emissions reduction goals by 2030 and confirm them.

In that conference, President Moon Jae-in pledged to cut Korea’s green gas emissions by 40 percent by 2030 compared to 2018 — a promise to keep in nine years. Just two months ago, when he lifted the reduction goal for 2030 to 35 percent from 26.3 percent in 2018, Korean industry expressed collective bewilderment. 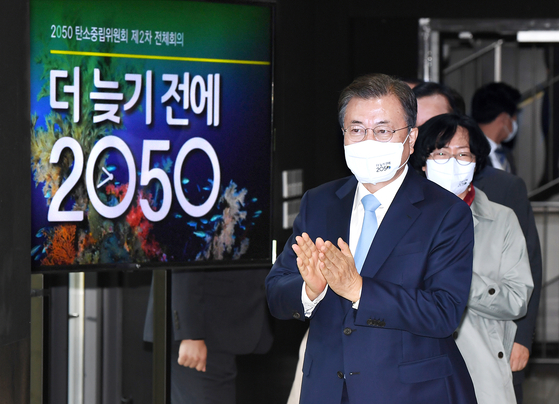 Then at the second plenary session on October 18 of the Presidential Commission on Carbon Neutrality, the leadership suddenly announced it will elevate the nationally determined contributions (NDC) targets to 40 percent as if the commission tried to reflect the president’s hopes ahead of his trip to COP26. Moon’s promise to cut emissions by 40 percent by 2050 may have earned a praise from the international community, but all the burdens will be transferred to the people.

The Carbon Neutrality Commission (CNC) was launched as an advisory committee for President Moon on May 29. The commission’s activities have been outstandingly swift and agile. In early August, it came up with three scenarios for achieving carbon neutrality by 2050, followed by its rubber-stamping of another two scenarios for the goal in 2050 and a plan to expedite the 2030 emissions reduction goal. The CNC approved an uncharted path toward carbon neutrality in just five months without weighing all possible repercussions of the decision on our society.

The scenario presented by the CNC nearly borders on a fantasy. The plan requires the construction of 500-gigawatts of solar power plants. Given the combined 600-gigawatt goal set by 27 member nations of the European Union with 500 million people, the commission’s goal is simply far-fetched. If weather permits the 500-gigawatt solar panels to generate at its full capacity, the electricity they produce is expected to be three to four times the electricity the entire nation needs. On top of that, we need to install humongous energy storage systems (ESS), which cost over 1,000 trillion won ($846 billion). As even more ESS are needed to brace for rainy days, the maintenance cost snowballs.

Technology for new energy sources with no carbon emissions is yet to be developed, not to mention the supply of clean hydrogen with economic feasibility. The commission’s blueprint to reduce emissions from industries by 95 percent is also highly unrealistic.

The international community has agreed on the difficulty of achieving carbon neutrality without nuclear reactors. President Moon reportedly also recognized the importance of reactors in his meeting with Hungarian President János Áder in Budapest after the G20 Summit in Rome. The EU plans to escalate the share of nuclear energy in its energy pie to 20 percent in 2050 from 12 percent now. In France, nuclear energy generates more than 70 percent of all its energy. The United States extended the life span of existing reactors to up to 80 years while hurrying to build small- and-midsized reactors. Nevertheless, the CNC steadfastly upholds President Moon’s nuclear phase-out policy.

The government’s carbon neutrality plan must not be a show for the rest of the world, but a practical plan to look for a new survival paradigm to create a sustainable environment for Korea. Not only the technology but also the schedule and cost should be fully scrutinized by experts followed by a national consensus on the price the people have to pay in the future.