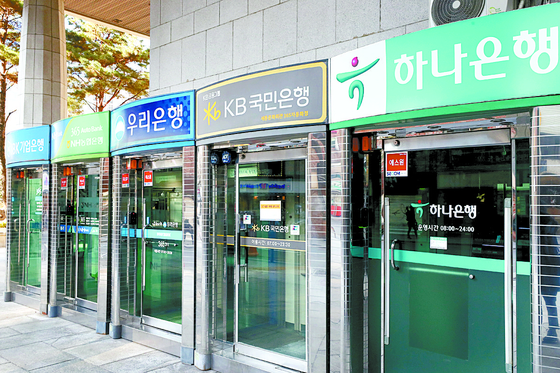 Time deposits were long neglected by investors as banks slashed interest rates to near zero. But the financial product has been gaining popularity following a rate increase in August, the first since November 2018.

Demand deposits, which have no fixed term and pay a lower rate, were 681.2 trillion won at the five banks, down 1.7 percent.

The stock market has been retreating recently, making low-risk time deposits more attractive. The Kospi peaked at 3,316 in July and is now trading at 2,925.

Trading volume also fell. According to Korea Exchange, an average 11.8 trillion won of Kospi shares were traded per day in October. That’s a 16 percent on month drop and the lowest since October last year. The figure is less than half of January’s average of 26.5 trillion won.

The central bank has been hinting about a further key rate increase, which is expected to make time deposits even more attractive.

An increasing number of people are choosing to keep their money in banks, but some say it’s a bit early to say investors are entirely moving out of the stock market.

The balance of retail investor holdings in foreign securities hit a record $89.7 billion in the July-Sept period, up 0.9 percent on quarter.

One factor that has kept investors from completely leaving the stock market is low interest rates. They have been climbing, but are still considered low.

According to the Korea Federation of Banks, average rate of a 1-year time deposits at four major banks — KB Kookmin, Shinhan, Woori and Hana Bank — was 0.84 percent as of Nov. 10. Preferential interest rates are given to customers using credit card issued by the banks or transfer services. The promotional rates are over 1 percent.

Although deposit interest rates are low, loan interest rates are soaring. Annual loan rates for people with a level-1 credit score, the best, at the four major banks ranged between 3.35 and 4.68 percent as of Nov. 1. The upper range is up by 0.51 percentage points from end of August. Mortgage rates ranged between 3.97 and 5.38 percent, both upper and lower ranges up by some 1 percentage point.

Loan rates has been rising due to the government restriction on loans to tame household debt, which is one reason why deposit rates haven’t been picking up at a faster pace.

“Banks can’t increase the amount of loans due to loan restrictions," said a bank employee who wished to be anonymous. "Thus, there are fewer incentives to attract people making deposits such as higher interest."