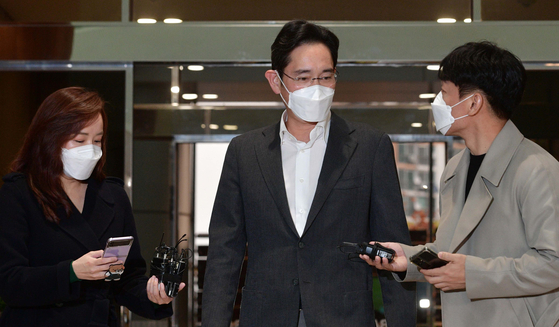 While details of his trip were not confirmed, reports indicate that he will be in Canada to visit a Samsung AI Center in Montreal.

In comments to reporters on Sunday at Seoul Gimpo Business Aviation Center in western Seoul, he did say that he will be meeting with executives from Moderna, the Cambridge Massachusetts-based pharmaceutical company.

When asked whether he will be making a decision on the building of a chip foundry, he only said that he will “meet with various partners in the United States.”

Samsung Electronics said in May that it will invest $17 billion and create a minimum of 1,800 jobs with a new chip-making plant in the United States. The company is said to be considering several locations, in Texas, New York and Arizona.

The chipmaker recently added the city of Taylor, Texas, as a candidate site for the plant. In July, it applied for tax incentives from the Taylor Independent School District to build a factory on a site some 60 kilometers (37 miles) from its existing semiconductor manufacturing facility in Austin, according to a document filed with the Texas Comptroller office.

It is possible Lee will make a final decision on where to build the foundry, but it is unclear whether he will make an announcement during or after the trip, according to a spokesperson for Samsung Electronics.

Lee is reported to have held online video meetings with Moderna’s managers prior to the trip.

This is Lee’s first overseas trip since visiting Vietnam in October last year. If he does enter the United States, it would be his first trip there in five years.

He has been attending court hearings every Thursday since being released on parole in August, making long-term trips impossible. A hearing will not be held in the coming week because of the CSAT exams that will take place on Thursday.

Lee is still to be tried for allegations of unfair trading and manipulating stock prices during the 2015 merger between Cheil Industries and Samsung C&T, as well as for accounting fraud at Samsung Biologics.

His trip was authorized by the Ministry of Justice, but Lee is prohibited from working for five years for any company connected to the crime for which he was convicted, according to the Act on the Aggravated Punishment of Specific Economic Crimes.

On Oct. 25, he presented a vision of a “New Samsung” on the first anniversary of the death of his father, Lee Kun-hee, and said he will reshape Samsung for the better.

“With a humble mind, we should go forward to build ‘a New Samsung’ and a better future for neighbors and society-at-large,” Lee said in a statement released by the company.