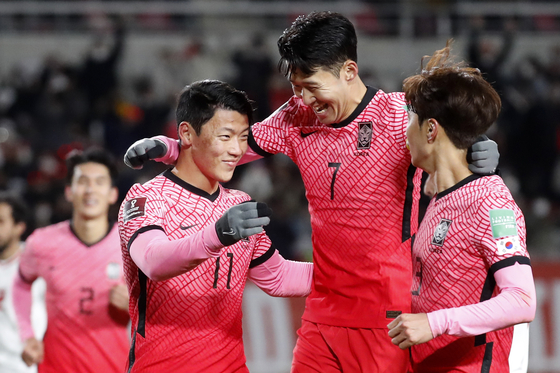 
Korea heads to Doha, Qatar, to play the second leg of the third round of Asian qualifiers for the 2022 Qatar World Cup on Tuesday, in second place of group A. The victory over United Arab Emirates on Thursday puts Korea in a good position to advance to the World Cup finals for the 10th consecutive time.

On Thursday, Wolverhampton Wanderers' Hwang Hee-chan scored the only goal of the match, converting a penalty kick in the first half and leading Korea to a win at home in front of 30,152 fans, the largest number of spectators allowed in any sporting event in two years due to the pandemic.

Heading to the game on Thursday, Korea needed to do better against UAE, a significantly lower-ranked team, if Korea wanted to arrive in Qatar next year as a force to be reckoned with. Korea is world No. 35 as opposed to UAE ranking No. 71. Korea has won 12 times, tied five times and lost twice against UAE.

But with front striker Hwang Ui-jo of Bordeaux out with an injury taken while on duty with the French club in Ligue 1, Cho Gue-sung took his place, with Hwang Hee-chan on the right and captain Son Heung-min on the left.

Korea had a good start, owning 80 percent of the ball throughout the first 20 minutes as opposed to UAE’s 20 percent. Cho, who has been on good form lately in Gimcheon Sangmu of K League 2, scoring eight goals in 25 matches this season, was on the offensive. He tried a header in the 12th minute, but the ball hit the goal post. Just minutes later, Cho tried a penalty shot, but his shot missed again, veering to the left.

In the 36th minute, the Wolves' forward made a breakthrough with a penalty shot. After compatriot Hwang In-beom drew a foul, Hwang Hee-chan slotted in the ball toward the bottom right corner, giving Korea a 1-0 lead. 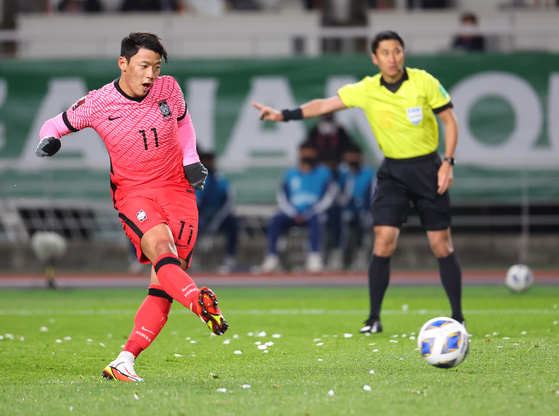 
It was an unlucky match for Korea's captain. Son tried his left in the penalty box in the 44th minute, and just as it seemed the Spurs' forward was about to score a wonder goal, it met the goal post. But Son was undeterred, hammering the UAE goal post several times. In the 73rd minute, Son tried a header that hit the cross bar once again, a failed attempt for Korea’s second goal.

“There should have been more goals,” said head coach Paulo Bento.

“The head coach’s decision is only right when the team wins. Cho has many strengths. I think that training will even improve his performance.

"A striker’s performance should not just be determined by goals. It’s important how the player helps out the team, and also how the striker plays defense." 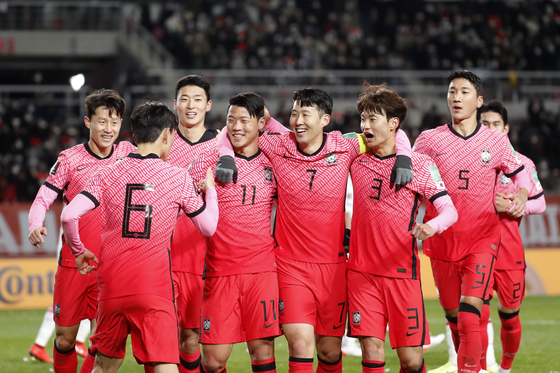 
Thursday's game completed the first leg of the third round, with the second leg set to start immediately on Nov. 16. Korea currently sits in second place in Group A with 11 points, two points behind Iran. As the top two teams advance to the World Cup, Korea is currently exactly where it needs to be.

Korea is six points ahead of third place Lebanon, and the gap makes it highly likely that Korea will be heading to their 10th consecutive FIFA World Cup. Lebanon will tie with Korea in points only when Korea loses two more games and Lebanon wins the next two games. After facing Iraq, Korea will then face Lebanon in January, Syria in February, Iran and UAE on March.