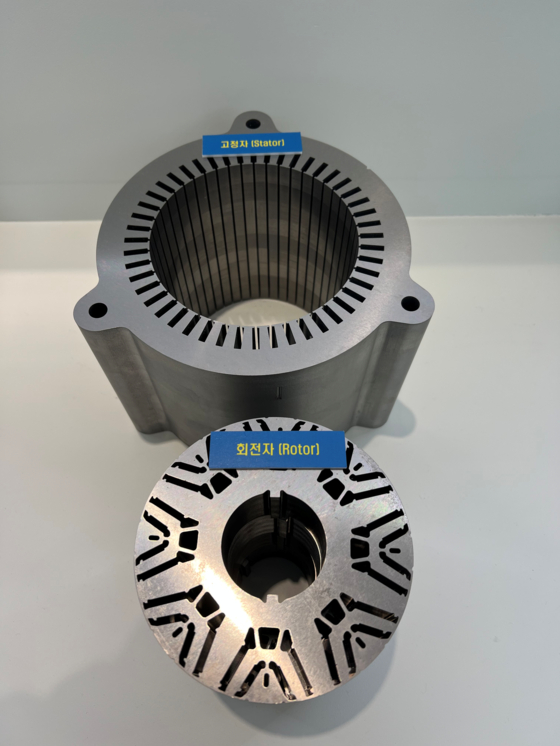 A Posco SPS motor core that was made with Posco’s hyper non-oriented magnetic steel sheet. [POSCO]

Traction motors, consisting of a stator and a rotor, play a pivotal role in generating electricity, and are the engines of electric vehicles.

Posco, the world’s fifth-largest steelmaker by output, said it will invest 1 trillion won starting next year to build a factory that will manufacture electrical steel sheets for traction motors.

The location of the factory was not revealed.

The new factory will raise Posco’s capacity to produce electrical steel for traction motors to 400,000 tons annually by 2025 from its current 100,000 tons.

The steelmaker said it will be able to produce more efficient electrical steel for traction motors at the new factory. A steel plate that has a thickness of 0.3 milimeters or less is one example. Thinner steel plate reduces energy loss.

“We’ll be able to respond to diverse types of demand” from the automobile industry by opening a new factory, said Posco in a statement. It added that the company will be able to reduce greenhouse gas emissions by 840,000 tons annually by contributing to making more electric vehicles.

The market share of environmentally friendly cars in the auto industry is estimated to reach 12 percent this year, and the figure is projected to jump to 43 percent by 2030, according to Posco.

“The speed of [the auto] industry moving towards eco-friendly cars from [vehicles] with internal combustion engines is being accelerated [as companies] try to respond to more stringent environmental regulations,” said the steelmaker in a statement.

It added that the importance of raising the efficiency of traction motors and their components is growing as improving electric cars’ mileage becomes more important in the automobile industry.

“Through the investment in new facilities, Posco will actively respond to changes in automobile trends and strengthen our global competitiveness,” it said.

Meanwhile, Posco said it was named the world’s most competitive steelmaker by the global steel information service provider World Steel Dynamics for the 12th consecutive year earlier this month.

A total of 35 global steelmakers were evaluated. Posco was followed by U.S.-based Nucor and Russia’s Severstal.

The company said it was recognized for its effort to expand sales of high-end products.