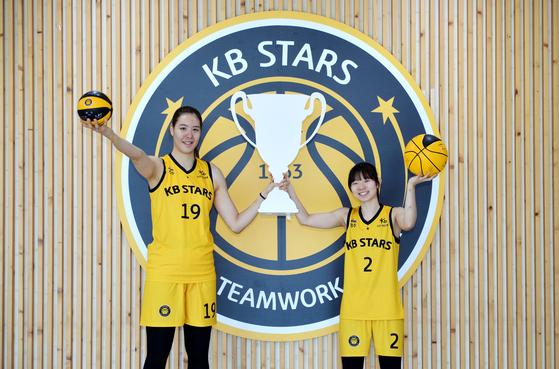 Park Ji-su, left, and Heo Ye-eun of the KB Stars pose for a picture at the KB Financial Group Training Center in Cheonan, South Chungcheong, on Monday. [JOONGANG ILBO]


The Cheongju KB Stars have won every single game since the 2021-22 Women's Korean Basketball League (WKBL) season began, cementing their dominant eight-game streak with a victory over Busan BNK Sum on Wednesday.

Cheongju took a tight 81-79 win over the Busan club at Sajik Gymnasium in Busan on Wednesday.

The KB Stars struggled in the first and second quarter, with the point difference at one point in the the second quarter widening to 12 points: Busan 40 and Cheongju 28. The KB Stars were not able to lead until the fourth quarter when Kang Lee-seul’s two-pointer put the club ahead for the first time. From then on it was neck-and-neck, with the clubs taking turns exchanging two- or three-pointers until time ran out.

With just 9.1 seconds left on the clock, the KB Stars called time-out as the scoreboard read 79-78 with Busan in the lead. The Stars came back on the court looking determined. Then basketball icon Park Ji-su was sunk one for the team, adding a two-pointer then scoring a rebound, adding three points to the club and leaving two seconds left on the clock. The buzzer rang and the Stars clinched their eighth consecutive victory.

Park scored a total of 32 points and 18 rebounds on the court, the most of the match, and was named MVP. Kang raised 18 points and Heo Ye-eun scored 10 points and 11 assists. 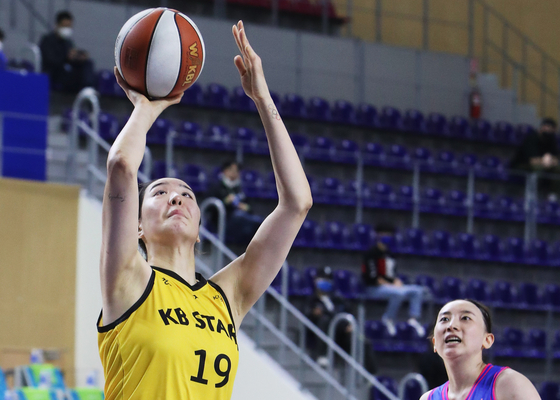 Park Ji-su of the KB Stars, left, plays at a match against the Yongin Samsung Life Blueminx on Oct. 31 at Yongin Gymnasium in Yongin, Gyeonggi. [YONHAP]


This season, KB Stars acquired Kang, an Olympian and WKBL veteran, in hopes that the addition would combine well with ace player Park. Kang debuted in the WKBL with Bucheon Hana 1Q in 2012 and, after playing for the Bucheon side for a decade, acquired free agent status and transferred to the KB Stars.

Kang is slowly getting used to the new team. She scored an average of 12.6 points per match and a 30.6 percent success rate in her three-pointers in her first six matches, a performance somewhat lacking compared to her usual form. Last season, she recorded a career-high average of 18.2 points, 7.1 rebounds and 2.4 assists per match.

“It was a physically tough match, but I had to keep going because it was so close,” Park said.

“We practiced overcoming pressure and opening the scoring a lot, and I think that helped in playing today’s game.”

The KB Stars will next face Bucheon Hana 1Q on Sunday.