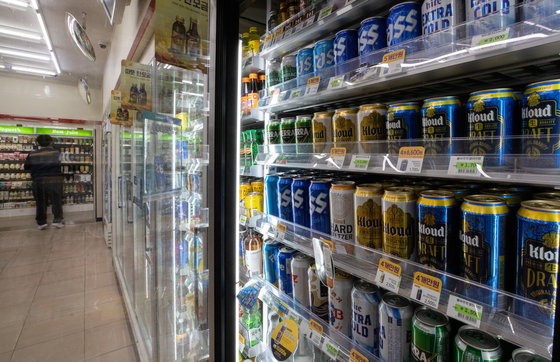 During the July-to-September period this year, people spent 12.3 percent more on liquor compared to the same period last year, ccording to a survey by Statistics Korea. [NEWS1]


Emergency relief grants and the Chuseok Holiday boosted spending in the third quarter by 8 percent compared to a year earlier, according to a survey by Statistics Korea.

But a lot of the spending was at home, despite the easing of social distancing restrictions.

During the July-to-September period this year, people spent 12.3 percent more on liquor compared to the same period last year.

That means drinking at home. When people drink outside, it’s classified as “meal costs.” Meal costs rose by only 4.4 percent in the third quarter.

The amount of money people spend on liquor has been rising steadily since the first quarter of 2020, Statistics Korea said.

With more time spent at home due to remote working and studying, people spent to spiff their places up. Spending on furniture and lighting rose 18.8 percent compared to the third quarter last year. Expenditure on home decoration rose by 27.9 percent.

“People have been starting to think differently about what their homes mean to them since last year, and we expect that to translate to more people caring about interior design or remodeling their houses,” said a representative of a furniture company.

Travel was a domestic affair, and people spent 22.7 percent more on accommodations such as hotels compared to the previous year.

In the second quarter, such spending rose 43.6 percent compared to the year before.

In the third quarter, 18.8 percent more money was spent on camping.

The increase in local travel has led to improved earnings for hotels and resorts in Korea.

People also spent 41.6 percent more on lottery tickets in the third quarter compared to 2020. Although the average monthly spending on lottery tickets is only 844 won, the increase was the highest since 2019 when Statistics Korea changed its tallying method. Lottery ticket sales are expected to hit a record this year.

A whopping 133.3 percent more was spent on musical instruments on year, while adult spending on hagwon [cram schools] rose by 23.6 percent. The increase was attributed to consumers cutting down on hobbies last year.

Even with eased social distancing restrictions, it’s likely that consumers will keep spending money on personal needs and decorating their homes, according to analysts.

“The categories that see more consumer spending are those that have satisfied people’s urges during the prolonged Covid-19 pandemic,” said Lee Eun-hee, a professor of consumer studies at Inha University.

“People are still reluctant to get together with colleagues for drinks and more travelers are opting for local destinations, so similar expenditure patterns will continue.”