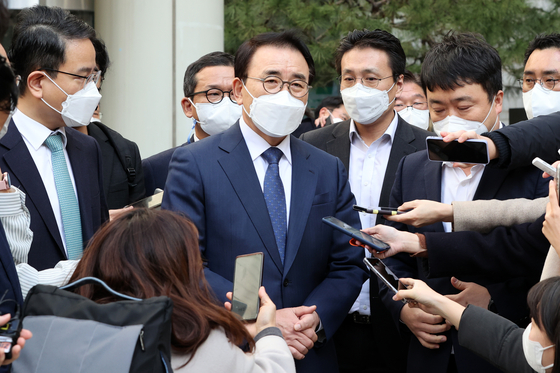 The Seoul High Court on Monday overturned his conviction last January and a suspended sentence of six months in jail.

He and six other people including Shinhan Bank human resources staff were indicted in October 2018 on charges of corrupt hiring practices. Prosecutors said Cho between 2015 and 2016 recruited sons and daughters of high-ranking government officials despite lower scores than competitors. At the time, Cho served as CEO of Shinhan Bank.

They were also accused of manipulating the recruitment process to make sure male applicants filled three quarters of the open positions.

The court found Cho not guilty of manipulating the proportion of male and female applicants hired.

On Monday, the Seoul High Court said it was hard to definitively say how hiring decisions were made.

Now that Cho has been acquitted, the 64-year-old will be able to tighten his control of the group.

Cho was not taken into custody after last year's conviction.

Last March, he won approval from shareholders to serve another term as the group's chairman despite opposition from the National Pension Service, the group's largest shareholder, and a major global proxy advisor, ISS.

Since his reappointment, Cho has been focusing on the group's environmental, social and governance strategies in hopes of recovering the trust of customers and shareholders.

Cho was invited to the 26th United Nations Climate Change Conference in Glasgow, Scotland, earlier this month. He was the only head of an Asian financial company to be invited to the conference, according to Shinhan Financial Group. Cho participated in the Marrakech Partnership and presented his group's carbon neutrality strategies.