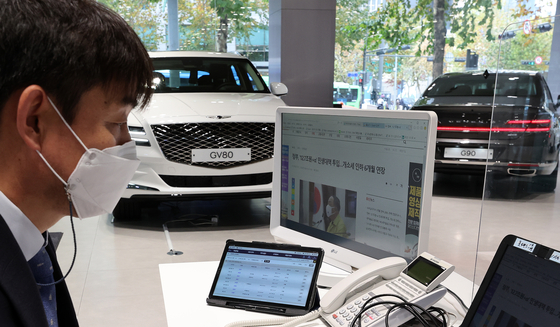 A cut in the consumption tax on car purchases has been extended for another six months, through June next year, as the government seeks to stimulate economic growth and help buyers who will not get their orders until 2022 due to supply-chain issues.

“The special consumption tax imposed on car purchases, which was scheduled for termination by the end of this year, will be extended by six months to June next year,” said Finance Minister Hong Nam-ki Tuesday during a government economy emergency meeting.

The tax will remain at 3.5 percent, down from the normal 5 percent.

Special consumption taxes are imposed on purchases of certain products, such as cars or cigarettes, and also on consumption at specific places, such as at golf courses, casinos and horse racing tracks.

The latest extension is expected to especially benefit consumers who have placed orders for new cars this year but haven't received their cars yet due to delays related to the shortage of chips. Discounts are given based on the delivery date.

Hyundai Motor takes eight months to deliver the pure-electric Ioniq 5, according to the carmaker Tuesday. It takes at least 10 months for Kia’s pure-electric EV6.

“There will be measures taken for people who were expecting to get their cars next year after placing an order this year,” Hong said.

The discount is expected to boost Korea’s auto industry, which is facing a challenging year.

The Korea Automobile Manufacturers Association forecast auto output to shrink by 3.5 percent to 1.84 million units in 2021.

Repeated extensions of the tax discounts on car purchases might lead to a reform of the consumption tax system as a whole, experts say.

For the past three and a half years, there was never a time when the rate was imposed at the full 5 percent.

"The special tax on cars made sense in the past because cars were considered as luxury items," said Kim Pil-soo, an automotive engineering professor at Daelim University. "But it has become a daily necessity now, and a more practical tax system on cars is needed."