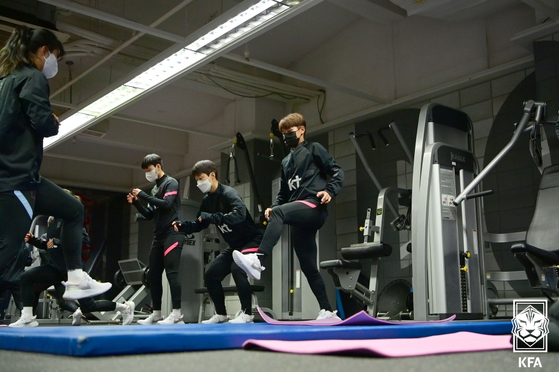 
The Korean women’s football team on Monday began training ahead of two friendlies with New Zealand which kick off later this week.

Head coach Colin Bell, who only recently recovered after contracting Covid-19, started training with the national squad at the National Football Center in Paju, Gyeonggi on Monday, with only Ji So-yun of Chelsea, Cho So-hyun of Tottenham Hotspur and Lee Geum-min of Brighton & Hove Albion missing.

The three Women’s Super League players joined the rest of the squad on Tuesday.

The games, to be played at Goyang Stadium in Gyeonggi, offer another chance for the national team to warm up ahead of the 2022 AFC Women’s Asian Cup, which kicks off on Jan. 20.

The Korean national team has had a busy year. In April, the Taeguk Ladies narrowly missed out on a chance to compete at the 2020 Tokyo Games after losing to China on aggregate in their final qualifier.

The national team bounced back in the qualifiers for the 2022 Asian Cup, beating Mongolia 12-0 and Uzbekistan 4-0 in September.

In the course of those games, Ji scored her 59th goal for Korea to overtake Korean footballing legend Cha Bum-kun, known as Tscha Bum, as Korea’s all-time leading goal scorer across all teams, all divisions, all genders and all competitions.

The Taeguk Ladies then flew to the United States last month for what promised to be two very challenging friendlies against the world-leading United States women’s team.

Korea got off to a surprising start in the United States, holding the U.S. squad to a 0-0 draw in Kansas City on Oct. 21. The United States didn’t underestimate Korea a second time, rallying for a 6-0 win in the second game on Oct. 26 in St. Paul, Minnesota.

At the Asian Cup, Korea has been drawn in Group C alongside Japan, Vietnam and Myanmar. With the top two teams advancing to the knockout stage, the Korean squad will be expecting to advance with wins against the weaker Southeast Asian teams.

New Zealand, ranked five spots below Korea at No. 23, should provide a good tune-up opportunity for the Korean squad. The two sides have faced each other 11 times, with Korea winning five, drawing five and losing only once.