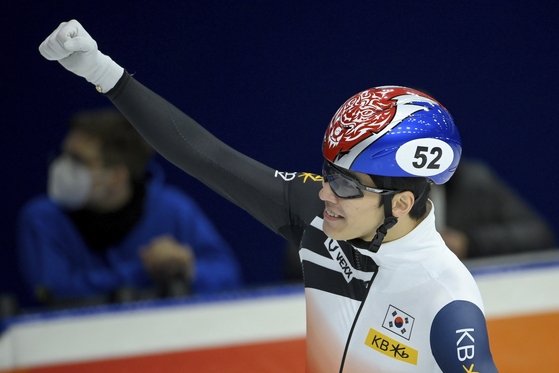 Hwang crossed the 1000-meter point first with a time of 1:25.425, a split second ahead of World Cup points leader Pascal Dion of Canada.

Hwang also won the men’s 5000-meter relay silver medal at Debrecen alongside Kim Dong-wook, Kwak Yoon-gy and Park In-wook with a time of 6:44.892.

Just before Hwang won his individual gold, Choi Min-jeong took silver at the women’s 1000-meter race with a time of 1:31.789. This is only her second World Cup medal this season after she won the 500-meter bronze medal at the first World Cup in Beijing.

Choi had to miss out on the second World Cup after being injured in the women’s 1500-meter final, crashing with compatriot Kim Ji-yoo.

Korea also finished last in the mixed 2000-meter relay with a time of 3:01.082.  Kwak, Lee Yu-bin, Park Jang-huk and Seo Whi-min competed in that event. This is an even more disappointing result for Team Korea as they had skated a world record 2:35.951 at the first World Cup in Beijing on Oct. 24.

The results raise concerns for the Korean national short track team with the Beijing Olympics about two months away. Korea is a short track powerhouse, with a world-leading 24 Olympic gold medals, well ahead of No. 2 China’s 10.

At Debrecen, Korea won one gold, two silver and one bronze. Korea now heads to the fourth World Cup at Dordrecht in the Netherlands.