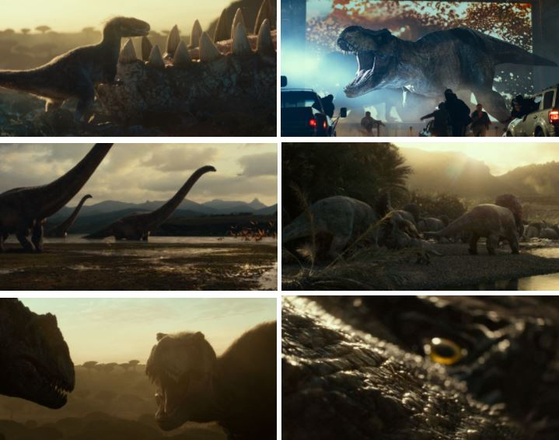 Scenes from ″Jurassic World: Dominion,″ which will hit theaters across the globe on June 10, 2022. [UNIVERSAL PICTURES]


The teaser, according to Universal Pictures, is not a part of the film but instead its own separate piece that tells the beginning of the story of the "Jurassic World: Dominion."

The preview takes audiences back 65 million years ago and introduces seven new types of dinosaurs. The clip shows a battle between a Tyrannosaurus and a Giganotosaurus. The Tyrannosaurus is eventually killed and the camera zooms in on a mosquito sucking its blood nearby.

Universal Pictures did not make it clear if the mosquito is the same one from the original “Jurassic Park” that helped to revive the dinosaurs.

The upcoming film will star Chris Pratt, Bryce Dallas Howard, Laura Dern, Sam Neill, Jeff Goldblum and BD Wong, among others. Director Colin Trevorrow who directed the 2015 “Jurassic World” once again took the helm. He wrote the script for the upcoming film along with Emily Carmichael.

Between happiness and constraints