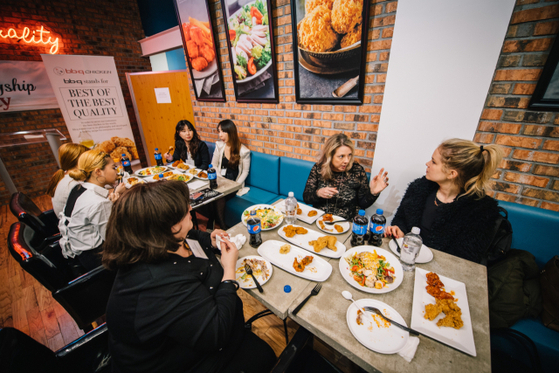 This year as of Nov. 25, Korean exports of agriculture and fishery goods totaled $10.13 billion, according to the Ministry of Agriculture, Food and Rural Affairs and the Ministry of Oceans and Fisheries on Sunday,

That is a 16.1 percent increase, the sharpest increase since 2011, and the total has already broken the total of $9.87 billion of agricultural and fishery exports full-year 2020.

The ministry noted that the $10 billion record is especially noteworthy as it was achieved during the global logistics crisis.

Among the food items exported, gim dried seaweed was the most popular, with more than $600 million won of the product sold to 113 countries.

The government noted that Korean food is now more recognized globally, supported by the rising popularity of Korean culture, which has been gaining exposure in other countries as a result of hits like "Squid Game," a Netflix Original, and due to the popularity of bands like BTS.

A survey by the Agriculture Ministry and the Korean Food Promotion Institute on Sunday found that foreign interest in Korean food has surged significantly compared to previous years.

In a survey conducted between August and September of 8,500 foreigners from 17 international cities, including New York, Paris and Beijing, 94.5 percent said they were satisfied with Korean food, which is up 3.5 percentage points compared to last year.

Of those surveyed, 70.2 percent were interested in Korean food, up 2.7 percentage points, and 90.1 percent of those who have visited a Korean restaurant said they were willing to recommend the food to others.

Among Korean dishes, the most popular was Korean fried chicken, with 30 percent saying it was the food they most frequently ordered.

Kimchi was the most popular for 27.7 percent, bibimbap 27.2 percent, tteokboki 18 percent and gimbap 15.5 percent.

The Korean Food Promotion Institute said Korean chicken and tteokboki were popular with women and younger people, while kimchi was popular with older people.

While noting that many foreigners consider Korean food to be affordable and healthy, the institute said it is now seen as hip.

The study also found that 84.3 percent of foreigners preferred Korean food that has been localized over authentic Korean food.

The Korean government has been promoting Korean food globally since 2008.