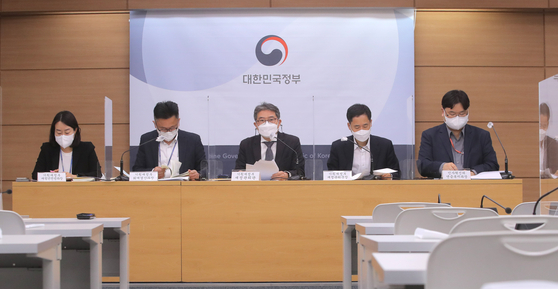 Officials at the Ministry of Economy and Finance hold a briefing on last year's government fiscal balance at the government complex in Sejong on Monday. [YONHAP]


The Korean government owes more than the country's GDP, if the broadest possible measure of public debt is used.

To arrive at the liability, the ministry adds short and long-term treasury securities, pension liabilities, local debt and other non-current liabilities.

One of the biggest contributors to the increase was the issuance of government bonds to finance Covid-19 programs. The four supplementary budgets were financed mainly through debt.

That's not only 53 percent of the country's liabilities but also a 10.6 percent increase from 2019.

The problem is expected to continue to grow as the Moon Jae-in government promised to aggressively expand the number of public servants.

Last year the nation's deficit, the difference between income and spending, reached a new record of 71.2 trillion won.

It was the second consecutive deficit and a rise of 493 percent year-on-year.

In 2020, tax revenue fell 2.7 percent to 285.5 trillion won as corporate taxes fell, though that was somewhat compensated for by strong capital gains tax revenues with the rise in stock and property prices.