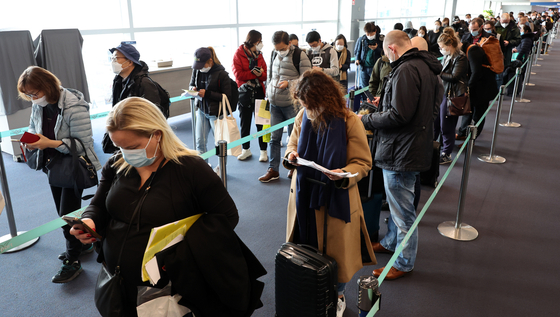 The rise of the Omicron variant in southern Africa has thrown a wrench into planning of forums in Seoul next month on Korea-Africa cooperation and international peacekeeping.

Over 1,000 people were supposed to fly into Korea to attend them.

The Foreign Ministry is scheduled to host the fifth Korea-Africa Forum in Seoul from Dec. 9 to 10 with the cooperation of the African Union. The last was held in Addis Ababa, Ethiopia, in 2016, and attended by representatives from 14 countries, including the foreign ministers of Korea, Ethiopia and Zimbabwe. It is also hosting from Dec. 7 to 8 its first UN Peacekeeping Ministerial meeting.

But with borders closed to all foreigners from South Africa, Botswana, Zimbabwe, Namibia, Lesotho, Eswatini (formerly Swaziland), Mozambique and Malawi since Sunday, the question on whether Korea will make exceptions next week for the delegates from South Africa and the seven other countries remains unanswered.

“We are trying to respond to the situation as quickly as possible, keeping all options on the table, including cancellation of the event or moving it to the online space,” a Foreign Ministry official told the JoongAng Ilbo on Monday.

The peackeeping forum was going to bring together over 1,000 people and was to be the largest in-person international conference hosted in Korea since the onset of the pandemic.

“As the current situation is in a flux, it is expected that certain changes will be inevitable in the preparation of the event as we follow the government's guidelines,” a foreign ministry official preparing for the peacekeeping forum told the JoongAng Ilbo on Monday.

“In order to respond to the situation, we have been thoroughly discussing the matter with the Korea Disease Control and Prevention Agency [KDCA] since last weekend.”

Korea closed its borders to foreigners flying in from eight countries in southern Africa following the discovery of the Omicron variant in South Africa, and its designation by the World Health Organization as a variant of concern on Friday.

Koreans flying in from the eight countries will be asked to quarantine at a government-run facility for 10 days, regardless of their vaccination status.

Foreign nationals on long-term visas will be treated as foreigners and will not be allowed to fly to Korea from those eight countries under the same rules as for citizens, though exceptions may be made for family emergencies.

No Omicron-variant cases have been reported in Korea.

“We’ve had 333 people enter from the eight countries in the past four weeks, but none of them tested positive,” said Jung Eun-kyeong, commissioner of the KDCA, in a press briefing on Monday.

It is the second time since February 2020 that foreign nationals have been prevented from entering the country due to Covid-19. From Feb. 4, 2020 to Aug. 10, 2020, foreigners from Hubei Province, China, were denied entry.

Even when Delta-variant cases spiked in India in June this year, Korea allowed foreigners from India to enter Korea as long as they quarantined for 14 days upon arrival.

Japan announced on Monday an even stronger prevention measure, stating it will close its borders to all incoming foreign travelers starting Tuesday.

Prime Minister Kishida Fumio made the announcement at a press conference at his residence on Monday, adding that it was a temporary measure until the health authorities have more information about omicron.

All Japanese nationals returning from several African countries including South Africa, or other countries where cases have been found, will have to undergo 10-day quarantines.

Little is known so far about whether the variant is more contagious or lethal than other coronavirus variants, though WHO officials said last week that the Omicron variant does seem to have a higher rate of infection than other variants of concern.