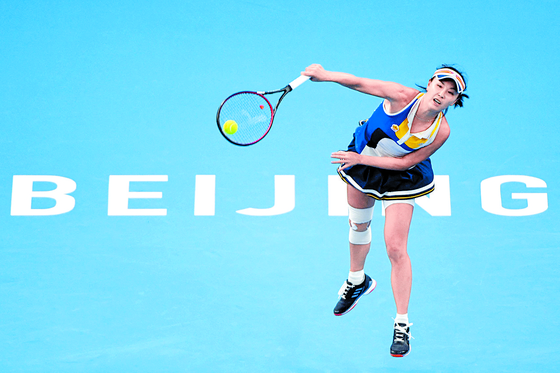 KIM PIL-GYU
The author is a Washington correspondent of the JoongAng Ilbo.

The Chinese people’s love for tennis is special even in the United States. If you visit tennis courts in the neighborhoods around Washington, D.C., two out of three teams would be Chinese. Chinese men and women of all ages love to play tennis, and parents are training their children passionately.

China became interested in tennis after it became an official Olympic sport in the 1988 Seoul Olympics. After Li Na from Wuhan won the French Open in 2011, tennis became explosively popular in China. With national support, many female players entered the top 100, similar to how countless “Park Se-ri kids” started golf and became successful after Park won the first LPGA tournament in 1998.

Then, the Women’s Tennis Association (WTA) paid attention to the Chinese market. A contract was made to hold the WTA final event at the new venue in Shenzhen for 10 years from 2019. China offered a total of $14 million in prize money each year.

But the situation turned as Chinese tennis star Peng Shuai wrote a post on Chinese social media site Weibo. Her whereabouts were unclear after she accused former Vice Premier Zhang Gaoli of sexual assault in her post. WTA President Steve Simon also stepped forward. Without an independent investigation into the case, the tour operation in China would be suspended, he warned. The WTA could not condone the case as it prioritizes sportsmanship and women’s rights.

A similar incident happened in the NBA. After Houston Rockets, where Chinese basketball star Yaoming was playing, had an exhibition game in China in 2004, the NBA became hugely popular in China. But after then-Rockets general manager Daryl Morey wrote a tweet supporting Hong Kong’s democratization protests two years ago, everything fell apart.

Rockets games were no longer shown on Chinese televisions, and Chinese companies cut their sponsorship. In the end, the NBA issued an apology, and then criticism poured in from American politicians that it surrendered to China, an oppressor of freedom of speech.

Last week, the New York Times published a column titled, “Do Sports Still Need China?” Once it seemed like an El Dorado, but global sports should make a choice as totalitarian threats grow in China. The International Olympic Committee (IOC) is also in the same position as it barely responds to the human rights issue in China. The Times warned, “China is a big market, but the rest of the world is still bigger. And if people have to choose, they’re not going to choose China.”

How should international sports respond to China? We are paying more attention to the outcome of the choice that women’s tennis has made.