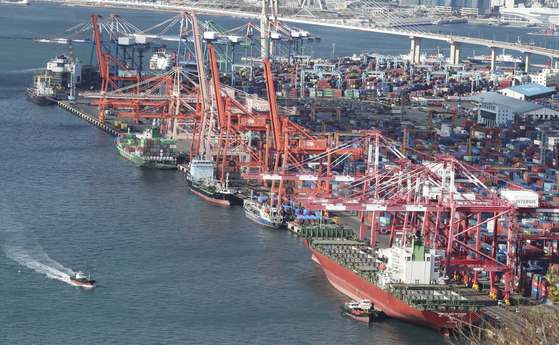 A dock at Busan on Wednesday. Koreas exports in Noembver set a new record where it exceeded $60 billion. It is an achievement made in eight years since monthly export exceeded $50 billion. [YONHAP]

Korea's monthly exports exceeded $60 billion for the first time in November and in the next four weeks are likely to break the annual record set in 2018, $604.9 billion.

According to the Ministry of Trade, Industry and Energy on Wednesday, exports in November increased 32.1 percent compared to a year ago to reach $60.4 billion.

The country's exports have increased for 13 consecutive months and the growth is beyond a mere base effect from a weak 2020, the ministry said.

In the last 11 months, exports have already reached $583.8 billion, 27 percent higher than a year earlier.

The automotive industry has been struggling with a shortage of computer chips.

While that shortage has not improved significantly, the statistics agency credited the release of new models targeted at European markets.

The ministry noted that exports to all nine of Korea's major markets increased for eight months in a row.

Exports to the U.S. and Europe have been growing year-on-year for 15 consecutive months; to China and South America for 13 months; to Asean, India and central Asia for nine month; and to Japan and Middle East for eight months.

Yet Korea’s trade surpluses continued on. Last month the trade surplus amounted to $3 billion and it was the 19th consecutive monthly surplus.

The emergence of the new variant of the coronavirus, Omicron, is becoming the biggest risk factor to trade in the future, with countries erecting barriers to visitors.

A World Trade Organization conference that was to be held in Switzerland was delayed because of the variant.

“The influence of the Omicron variant is not included in November’s exports figure,” said Moon Dong-min, head of the Ministry’s trade and investment bureau. “However, the government is closely monitoring the progress of the variant and seeing how it may influence our exports.”