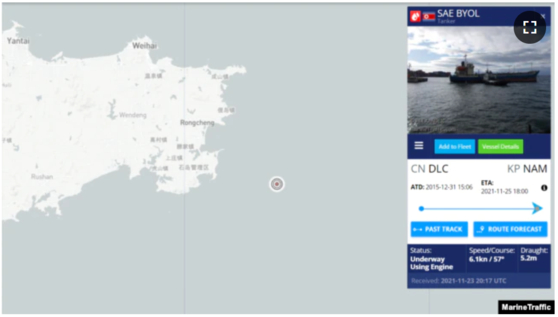 The North Korean oil tanker Sae Byol was tracked to a location 30 kilometers (18.6 miles) off the coast of Shandong Peninsula, eastern China, on Nov. 23. [VOA]

Canada has observed at least 24 ship-to-ship transfers and over a hundred “vessels of interest” in the waters off China’s eastern coast, particularly near the Shandong Peninsula, possibly abetting North Korean efforts to thwart sanctions since mid-October.

In a press briefing Monday, State Department spokeswoman Jalina Porter urged the North to obey sanctions when asked about the ship-to-ship transfers, which the North is likely conducting to obtain oil and other embargoed goods.

Porter also called on the international community to present a united front in pressuring Pyongyang to halt its nuclear and missile weapons tests, abide by Security Council resolutions and engage in negotiations with Washington to find a way out of the nuclear impasse on the Korean Peninsula.

In a possible prod at China – the main purchaser of the North’s exports and its main lifeline of vital supplies -- Porter added that international sanctions on North Korea remain in force, and that the United States calls on all United Nations member states to carry out enforcement of Security Council resolutions.

China is one of the five permanent members of the Security Council.

Illegal ship-to-ship transfers by North Korean vessels flying the flags of other countries have long been a method employed by Pyongyang to evade sanctions.

However, the latest United Nations report on North Korea noted that the country’s exports of coal and other commodities that are subject to sanctions have continued at a “much reduced level” compared to previous reporting periods, likely due to the North’s border closures as a result of the Covid-19 pandemic.

In response to its position on the ship-to-ship transfers likely being conducted by the North, the South Korean Foreign Ministry said Tuesday that the government is “closely watching adherence to Security Council resolutions” and “will continue to work towards securing the international community’s close cooperation so that the resolutions are carried out.”

The Foreign Ministry’s statement did not mention North Korea by name.

While South Korean Foreign Minister Chung Eui-yong in September suggested easing sanctions on the North as way to induce it back to the negotiating table, the administration of U.S. President Joe Biden said repeatedly that it will meet North Korea without pre-conditions to discuss denuclearization,

James Kim, a research fellow at the Asan Institute for Policy Studies, noted that while the Biden administration understands Seoul's stance towards Pyongyang's illicit activities and “tries not to highlight differences between the two allies’ approaches to the North,” he said that a continued divergence in their tone regarding the North could have a “negative influence on the U.S.-South Korea alliance.”