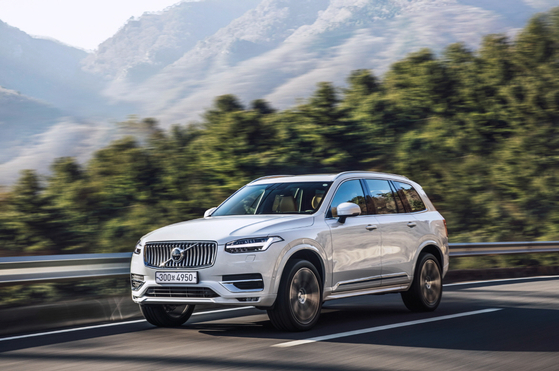 Volvo’s flagship XC90 was named the most popular SUV for recreational use among imported cars, according to a survey conducted by online car marketplace Encar.

Out of 1,445 respondents, 18.41 percent chose the XC90 as their preferred vehicle for recreational use, mainly because of its safety, the survey found.

The XC90 was introduced in 2002 as Volvo’s first SUV model and has won over 100 global awards since then, including the Car of the Year prize in the SUV category in 2003. The second edition of the model, which was released in 2015, became the carmaker’s new keystone in the global market, according to Volvo.

Taking a step forward, Volvo announced that the powerful engine has been replaced with a plug-in hybrid system, in line with the carmakers action plan to achieve climate neutrality by 2040.

Volvo, which is headquartered in Sweden, describes the interior of the XC90 as “the Scandinavian expression of luxury.” The expansive inner space and ergonomically designed seats provide an ideal driving experience, even offering side support, massage and ventilation features.

Moreover, as seats in the first and second row are arranged in tiers, passengers can enjoy a broad view wherever they sit. A panoramic sunroof is included in every trim as well.

Those who enjoy camping and driving with their dogs will also find the XC90 appealing, Volvo said. To accommodate those with pets, Volvo is offering safety options for dogs such as a dog harnesses and gates.

Furthermore, the carmaker incorporated the finest audio sound system in the flagship option worth over a hundred million won, in cooperation with the British high-end speaker and headphone maker Bowers & Wilkins.

The XC90 is equipped with Volvo’s cutting-edge safety features such as roll-over protection system and driver assistance systems.

Volvo’s “City Safety” system is a world first that detects not only cars but also other possible obstacles such as pedestrians, bike riders and animals and prevents accidents using an autonomous emergency braking system and collision avoidance technology.

Options available for the XC90 include a gasoline mild hybrid engine with a B6 powertrain, which has a max horsepower of 300, and a T8 twin engine plug-in hybrid powertrain.

Strange use of official vehicles (KOR)