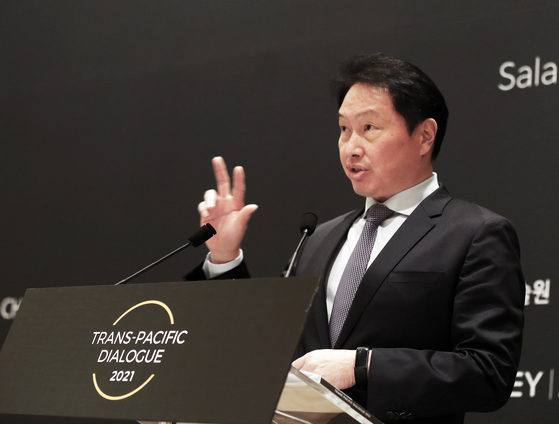 SK Inc. Chairman Chey Tae-won announces $40 billion of investment in the next four years in the U.S. as part of a plan to contribute to cutting carbon emissions during the Trans-Pacific Dialogue held in Washington DC on Monday. [SK INC]

The chairman also noted the importance of cooperation between the private sector and the public sector in solving major global issues, including the supply crisis and climate change.

"A month ago, SK CEOs gathered and decided to pursue a mission on carbon reduction," Chey said during the first Trans-Pacific Dialogue 2021 held near Washington on Monday. "Our goal is to reduce 200 million tons of carbon by 2030, which is an aggressive target as it is equivalent to 1 percent of the world's reduction goal."

He first announced the carbon-emission reduction target during the group's CEO seminar held in late October.

During the seminar, Chey said the group has accumulated roughly 450 million tons of carbon as it is involved in petrochemicals.

He said by around 2035, the group will achieve "a carbon zero footprint," as the reduced emissions will offset accumulated emissions.

Part of its plan is reducing 50 million tons of carbon immediately by increasing the efficiency of production and through renewable energy.

Additionally, SK Inc. plans to invest more than 100 trillion won in environment-friendly businesses, including EV batteries and hydrogen. Also, it plans to support its contractors in converting to environment-friendly management and production that would contribute to cutting carbon emissions.

During Monday's forum, Chey stressed that only through cooperation between private companies and the public sector based on environmental, social and governance (ESG) principles will the current global supply crisis and environmental problems be solved.

Chey stressed that the geopolitical environment in East Asia and Indo-Pacific has never been more complicated than it is today.

"The three countries -- Korea, U.S. and Japan -- face many common challenges," Chey said. "The strategic competition between the U.S. and China, the overall conflict in the surrounding countries in Indo-Pacific, problems regarding North Korea's denuclearization and the collapse of the global supply network are issues that needs to be solved immediately."

The investment in the United States for reducing carbon is one possible solution.

"Chairman Chey Tae-won even amid the coronavirus crisis has visited the United States four times this year alone," said an SK Inc. official. "He has been focusing on economic ties in the private sector."

SK Inc. in its press release said the participation of such key officials even at a time when concerns about the Covid-19 variant, Omicron, are increasing shows the interest in the need for mutual cooperation and policy sharing.

The Trans-Pacific Dialogue is a forum that was created by Chey Institute for Advanced Studies and focuses on discussing diplomatic and geopolitical issues.

The institute, a knowledge-sharing platform, was founded in October 2018 honoring the late Chey Jong-hyon, SK founder and father of current chairman.