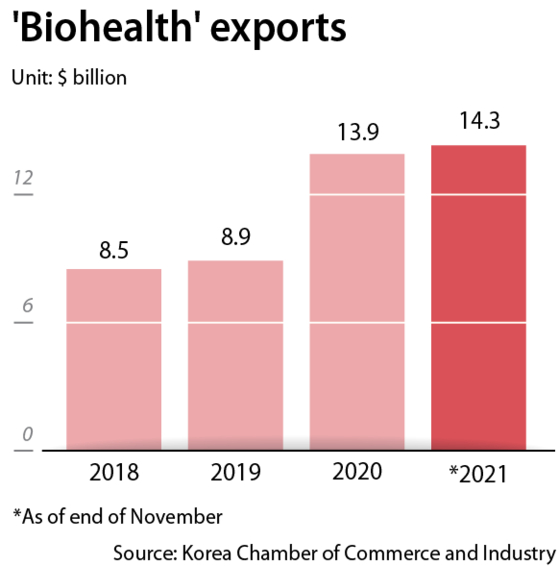 "Biohealth" exports totaled $14.3 billion this year through November, a record high, according to data provided by the Ministry of Trade, Industry and Energy, though exports of these products fell on year in November.

The Ministry of Trade, Industry and Energy defines biohealth as biopharmaceuticals, medical devices including test kits and health management services. It is a category unique to Korea and not an accepted classification standard for international trade.

This will be the second consecutive year the exports exceeded $10 billion. In the full-year 2020, the exports totaled $13.9 billion.

"The exports of biohealth will likely reach $15 billion this year," said Park Jin-kyu, Vice Minister of the Ministry of Trade, Industry and Energy.

In October alone, biohealth exports rose 11 percent on year to $1.32 billion. Biosimilars and test kits drove the growth, led by exports to the United States market, the ministry said.

Biosimilars are biological products that are approved based on proof that they are highly similar to other U.S. Food and Drug Administration-approved products. The drugs have no clinically meaningful differences in terms of safety or effectiveness from the reference product, but they cost less.

"Exports were high in November but it declined compared to the same month a year earlier because the exports in November 2020 were too high," said a spokesperson for Ministry of Trade, Industry and Energy. "This year's November figure is No. 4 among all monthly data so far."