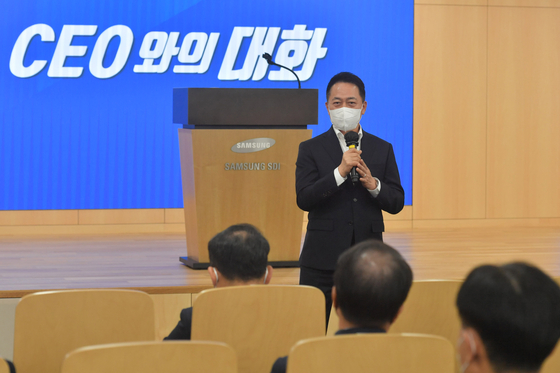 Samsung SDI's new CEO Choi Yoon-ho talks with executives and employees of the company at its Giheung headquarters in Yongin, Gyeonggi on Monday.

Samsung SDI’s new CEO wants the company to be No. 1 in the EV battery market, from the current No. 6.


“Let’s embark on Samsung SDI’s journey towards becoming No. 1,” Choi Yoon-ho said in a meeting Monday with executives and employees of the company at its Giheung headquarters in Yongin, Gyeonggi.


It was his first meeting with the employees since he was appointed as the company’s new CEO last week.


“In any difficult circumstances, opportunity for growth is always there,” he said.  "Only prepared companies can grab that opportunity and lead it to growth.”


Samsung SDI was in sixth place in terms of battery supply for EVs during the first 10 months of this year, according to Seoul-based market tracker SNE Research.


LG Energy Solution came in second and SK On came in No. 5.


“Becoming No. 1 means achieving competitiveness in technology and having the upper hand in profitability based on best quality,” Choi said.


“Based on long-term roadmap on technology development, Samsung SDI should develop next generation battery technology and innovative manufacturing method that guarantees safety.”