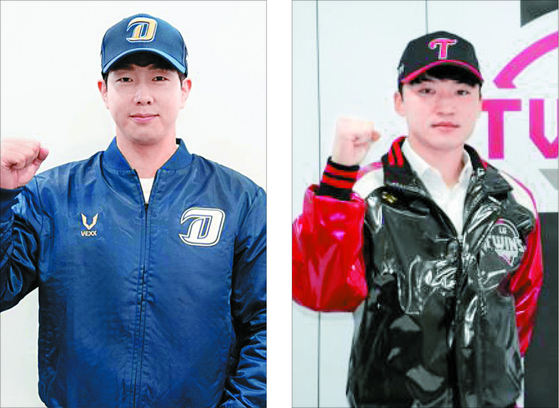 
The KBO’s free agent market burst into life on Tuesday, with two of the biggest players up for grabs signing lucrative deals with new clubs.

Park Hae-min debuted with the Lions in 2013 and spent the following eight years developing into one of the best outfielders in the KBO.

He’s also a solid offensive player with a career .286 batting average and a serious turn of speed, stealing 318 bases in his career and leading the KBO in that category from 2015 to 2018.

Park Hae-min was one of the biggest names in this year’s free agent (FA) market, and the first of the “A-rated” players to sign a new contract.

Alongside Park Hae-min, Kim Jae-hwan and Park Kun-woo of the Doosan Bears, Seo Geon-chang of the Twins and Na Sung-bum of the NC Dinos were each included in the KBO’s top FA category.

Just hours after the Twins signed Park Hae-min, the NC Dinos announced that they had signed outfielder Park Kun-woo on a six-year-deal worth 10 billion won.

Park Kun-woo debuted with the Bears in 2009 and became a regular fixture in the Doosan lineup from 2015.

With a .326 career batting average, Park Kun-woo is a defensive powerhouse, batting over .300 every season since 2015.

While not necessarily a power threat at the plate, Park Kun-woo hit double-digit home runs for five straight years from 2016 to 2020.

There had been little movement in the FA market before Tuesday, with the only other deal going to catcher Choi Jae-hoon, who signed a five-year, 5.4-billion-won deal to stay with the Hanwha Eagles.

With both Park Kun-woo and Park Hae-min now also off the market, teams are expected to move faster to lock in deals as the market continues to heat up.

NC’s Na could provide some additional intrigue this year, as the slugger may try posting to the major leagues again.
Last year, Na made a bid to move to the majors, but failed to land a contract within the posting period.

The KBO announced in November that they have again received a status request for Na, the very first step toward a possible move to the United States.

If a move to the majors isn’t on the table for Na, there is likely to be plenty of interest in the KBO, with the Kia Tigers rumored to be looking to sign the slugger to a big deal.