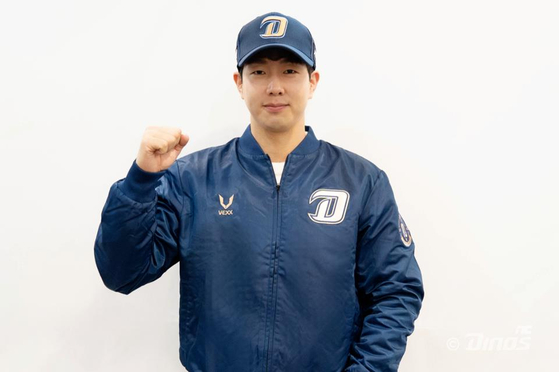 
The NC Dinos on Tuesday signed outfielder Park Kun-woo on a six-year-deal worth 10 billion won ($8.5 million).

Park, formerly of the Doosan Bears, will earn 5.4 billion won in guaranteed salary spread over the six year with 600 million won in incentives. He will receive a 4 billion won signing bonus.

Park debuted with the Bears in 2009 and became a regular fixture in the Doosan lineup from 2015. With a .326 career batting average, Park is a defensive powerhouse, batting over .300 every season since 2015. While not necessarily a power threat at the plate, Park hit double-digit home runs for five straight years from 2016 to 2020.

Park is the second free agent (FA) to sign a deal on Tuesday, after Park Hae-min, formerly of the Samsung Lions, agreed to a four-year-deal worth 6 billion won with the LG Twins.

The two Parks are two of the biggest names in this year's FA market, alongside Kim Jae-hwan, also of the Doosan Bears, Seo Geon-chang of the LG Twins and Na Sung-bum of the NC Dinos.

There had been little movement in the FA market before Tuesday, with the only other deal going to catcher Choi Jae-hoon, who signed a five-year, 5.4-billion-won deal to stay with the Hanwha Eagles. With both Park Kun-woo and Park Hae-min now also off the market, teams are expected to move faster to lock in deals as the market heats up.

The departure of Park Kun-woo and the possible departure of Kim Jae-hwan once again raises questions about how effectively the Bears can rally next year to compensate for the new holes in their lineup. Park is the latest in a long line of FAs to leave the Bears over the last few years, including perennial Golden Glove winner Yang Ui-ji and sluggers Min Byung-hun, Choi Joo-hwan and Oh Jae-il.