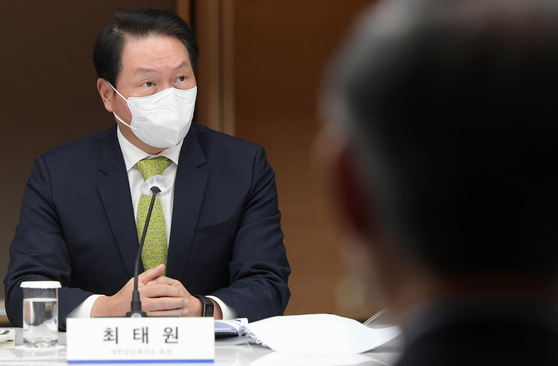 SK Group Chairman Chey Tae-won will personally argue to the Fair Trade Commission (FTC) that he didn’t get a sweetheart deal in his purchase of almost a third of LG Siltron in 2017.

The FTC was to hold a meeting headed by the commissioner on Dec. 8 to discuss the deal, but it was delayed one week, and Chey will be attending.

A personal meeting between a chaebol head and the regulators is highly unusual. Normally attorneys will present arguments defending their clients facing charges from the FTC.

In January 2017, SK Holdings acquired 51 percent of LG Siltron, a silicon wafer manufacturer, for 620 billion won, which comes to 18,000 won per share.

Civic groups are crying foul as the discount was given when SK Holdings, now known as SK Inc., was the controlling shareholder of LG Siltron, now SK Siltron.

As Chey is chairman and co-CEO of SK Inc and owns 18.4 percent of the company, the deal was a connected-party transaction, where the buyer may have influence over the decisions of the seller.

The FTC carefully scrutinizes deals where a conflict of interest may exist.

Chey bought the shares — from creditors including Woori Bank — through a swap deal with brokerage firms, including Samsung Securities and Korea Investment & Securities.

The transaction is being questioned by the Solidarity for Economic Reform, a chaebol reform group originally known as People's Solidarity for Participatory Democracy

SK Inc. has argued that Chey participated in the acquisition of the remaining shares to block possible foreign ownership, especially by interests from China, of a company that makes crucial components for semiconductors.

According to reports at the time, one possible investor owed money to creditors from China.

SK Inc. also says the stake was purchased through an open bid organized by the creditors.

The FTC started its investigation in 2018 and disclosed its findings to SK Inc. in August.