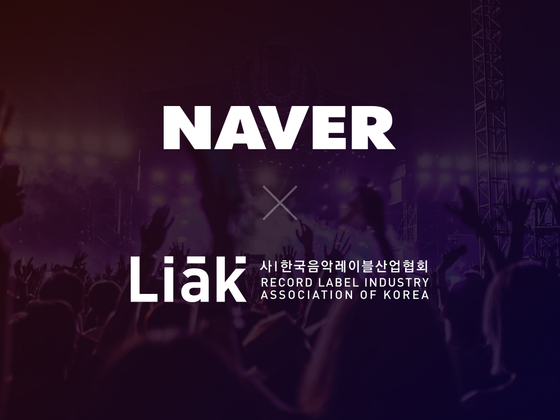 Naver and the Record Label Industry Association of Korea (LIAK) signed a memorandum of understanding (MOU) on Wednesday to change the way revenue from music streams are allocated to creators to ensure copyright holders maximum return for their work. [NAVER]

Naver and the Record Label Industry Association of Korea (LIAK) signed a memorandum of understanding (MOU) on Wednesday to change the way revenue from music streams is allocated to creators in an effort to ensure copyright holders receive the maximum possible return on their work.

With its Vibe Payment System (VPS), Naver has been pushing to change the revenue distribution system since last year to propose a different approach to how music streaming services divide the revenue to music creators.

The VPS does not sum up the revenue from all users but calculates how many times a single user has played a song for more than 1 minute then allocates the money to copyright holders based on that single user's consumption amount.

For instance, if one user paid $10 for a monthly service and only listened to BTS's "Butter" once during that month, then their money goes only to the copyright holder of "Butter" and no one else.

On other streaming services, their $10 would be added up with the rest of the service users and divided as a whole. If there is a music service with 1 million users and a certain song has been played only once during the entire month, then that song's copyright holder will get less than one-millionth from the $10 million total available. With the VPS, a larger amount of money would go to that song's creator.

"This method ensures that creators with fewer fans, such as indie singers, are guaranteed more income than the conventional method," Naver said.

Naver has been pushing for the VPS since last year, and 90 percent of music distributors have agreed to using the method, according to Naver.

Through the MOU, LIAK will encourage the rest of its member companies to agree to using the VPS and also promote the method for other streaming services to use as well. LIAK will hold a discussion on Friday during the Seoul Music Forum on streaming distribution systems.

"A music market where different kinds of music coexist will become the foundations upon which the Korean music industry can grow," said Lee Kyu-young, president of LIAK. "We ask that everyone in the music market think together on what is good for all."