Fulfillment is aspiration of big e-merchants

Fulfillment is aspiration of big e-merchants 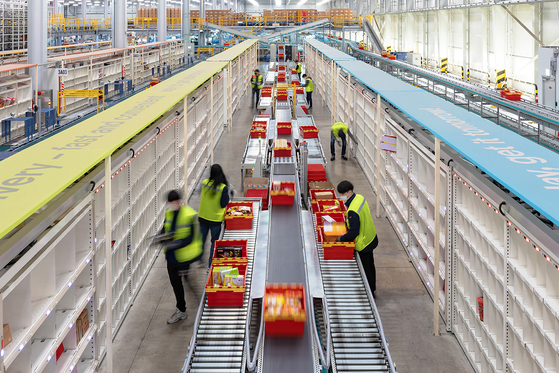 
As competition grows in e-commerce, the big boys are seeing logistics as a key to success.

How each company deals with logistics could decide which makes it in Korean e-commerce -- which is not yet dominated by a single player.

Total transactions on e-commerce platforms in Korea last year were around 161 trillion won ($145 billion), up 19.1 percent from a year before.

Coupang is probably the most enthusiastic about building distribution facilities.

As of last December, Coupang had more than 100 logistics facilities that added up to more than 25 million square feet. Based on those distribution networks, the company offers same-day and next-day deliveries in selected regions, including Seoul.

In a recent filing with the U.S. Securities and Exchange Commission ahead of its listing on New York Stock Exchange, Coupang said net cash used in investing activities last year was $520.7 million, up 138.6 percent from a year ago. The company said the increase was mainly driven by purchases of property and equipment, adding "our capital expenditures primarily related to investments in our fulfillment and logistics infrastructure, as well as technology equipment and capabilities."


The company added that it plans to “enhance our infrastructure by building new fulfillment and logistics centers to expand coverage, reduce delivery times and optimize our cost structure.”

A fulfillment center is a warehouse that assembles orders and packs and ships them to customers on behalf of sellers.

Last year, Coupang announced plans to build seven new distribution facilities. Coupang did not reveal the entire cost for building them, but said it was spending 224 billion won on a distribution facility in Gwangju, which was expected to be completed in the first half of 2023. 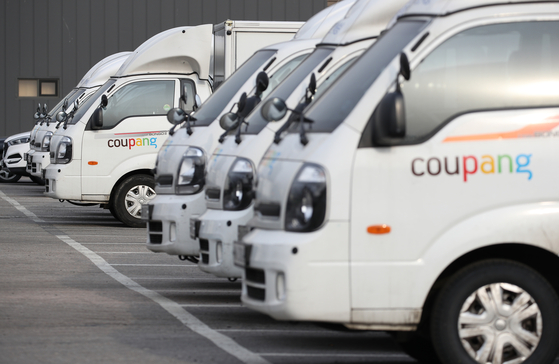 
Smaller rival Market Kurly is taking a similar approach of building its own distribution centers.

Naver, which acquired a 7.85 percent share in CJ Logistics last year, is strengthening its delivery capacity through a partnership with it.

“Naver is mulling offering next-day deliveries on products like daily necessities that need to be delivered fast through an intensified partnership with CJ Logistics,” said Naver CEO Han Seong-sook in an online conference held last week.

It usually takes several days for shoppers to receive products bought on Naver portal. Naver functions as a platform connecting seller and buyer instead of directly purchasing goods from vendors and selling them.

Retailers with brick-and-mortar stores are trying to make the best use of them as more important parts of the logistics chain.

SSG.com, operated by Emart, has so-called picking and packing centers at 110 of its 161 Emart and Traders stores.

Picking and packing centers are spaces where products for orders placed online are assembled and packed.

Combined with its three distribution centers in Gimpo and Yongin, Gyeonggi, SSG.com is capable of processing around 130,000 packages a day.
“SSG.com is currently making use of offline stores because building a delivery network is of the utmost importance when it comes to logistics,” said Kim Ha-eun, a spokesperson for SSG.com. “But we’re currently looking for land to build a new distribution center.”


Lotte makes similar use of Lotte Mart discount stores. It has picking and packing services at 15 Lotte Marts. It plans to expand that to 30 stores this year.

Lotte partnered with logistics start-up PLZ in January to provide deliveries via motorbike.

“The core competitiveness of an e-commerce player is its ability to deliver [fast],” said Kim Ik-sung, a business professor at Dongduk Women’s University. “They may be suffering losses in the short run, but the retail war is a matter of occupying the market. To build a fulfillment system that predicts consumer demand and stocks the products in demand, analysis from artificial intelligence and big data are required.”