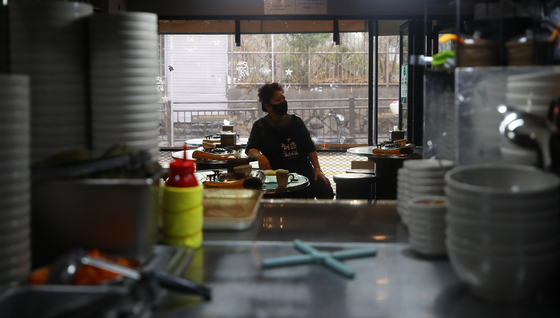 A restaurant owner watches the news in her empty establishment in Seodaemun District, western Seoul, on Wednesday, as the government announces its plans to implement much stricter social distancing measures. [YONHAP]

As Covid-19 runs rampant, authorities eventually decided to make a U-turn from its return to normalcy back to its much stricter social distancing measures.

The Korea Disease Control and Prevention Agency (KDCA) reported 7,850 new Covid-19 cases Wednesday, a leap by 2,283 from the previous day, raising the total caseload to 536,495. This was the highest single-day total of new Covid cases to date, since the country saw its first patient on Jan. 20, 2020.

The daily number of new cases rose nearly 4.7 times in less than two months compared to the figure on Nov. 1 — 1,684 cases — when the country first started its “Living with Covid-19” strategies.

In line with the increasing daily cases, the number of critically ill patients passed the 900-mark the previous day with 906 and rose again to hit 964 — a threefold increase from Nov. 1's 343.

Sixty-nine more people died of the virus, bringing the death toll to 4,456.

With the pandemic worsening, the government decided to halt its plan for a gradual return to normal life and return to its intensive social distancing measures.

Saying that the government views the current virus situation “to be very grave,” Prime Minister Kim Boo-kyum declared in Wednesday’s virus response meeting that it “plans to implement much stronger social distancing measures.”

It is likely that the authorities will announce extra public health measures on Thursday to enforce for the following two weeks.

The government is reportedly considering limiting social gatherings to four people in the greater Seoul area from the current six in the capital area or eight elsewhere, and forcing businesses to close at 9 p.m. or 10 p.m. — similar to the Level 4 measures under the previous social distancing scheme.

The prime minister added, “If the measures are implemented, we will also come up with suitable compensation measures for small business owners and self-employed people who will once again have to bear the brunt.”

Meanwhile, some are saying the government already missed the golden hour to curb the virus spread, citing the long hesitation in implementing the “extraordinary measures” that it had previously announced.

Regarding such criticism, Son Young-rae, senior epidemiological strategist at the Central Disaster Management Headquarters, in a briefing Wednesday said that stricter distancing “is effective for public health but the social cost to bear is also quite high,” adding, “there is a lot to reflect on prior to making the decision.” 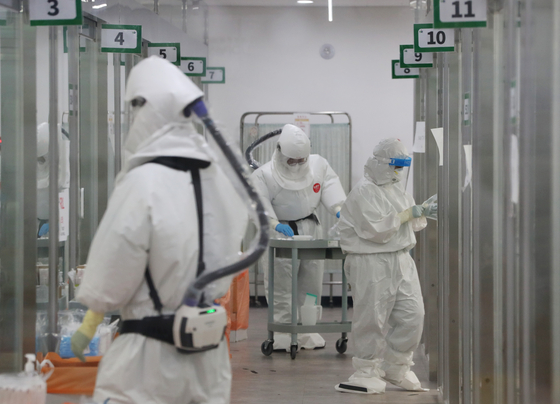 Medical workers in protective gear work at an intensive care unit at Osan Hankook Hospital, a medical facility only for Covid-19 patients in Osan, Gyeonggi, on Wednesday. [NEWS1]


With the country keeping its guard up against the more transmissible Omicron variant of Covid-19, Korea extended its 10-day mandatory quarantine rule for all overseas arrivals through Jan. 6.

Along with the quarantine extension, Korea will keep its borders closed to eleven African countries, including South Africa, for another three weeks.

Korea had tightened immigration measures and required all international arrivals to quarantine for 10 days regardless of whether they are vaccinated from Dec. 3 through Thursday. But considering the lack of information on the severity of Omicron in addition to its relatively fast transmission and its spread worldwide, authorities extended the measures.

Korean nationals and foreigners on long-term visas will be allowed to isolate at home, while foreigners with permission to stay of 90 days or less will have to quarantine at a temporary residential facility designated by the government. They must take a total of three Polymerase Chain Reaction (PCR) tests — before entry, on the first day after entry and before their release from quarantine.

Quarantine exemptions will still be issued under certain circumstances, such as for people attending a funeral within seven days and for those needed to perform public duties at an executive-level. Exemptions for family visits or for business purposes will no longer be granted, health officials added.

People arriving from jurisdictions that have signed a travel-bubble agreement, such as the Northern Mariana Islands, where Saipan is situated, and Singapore, are exempt from quarantine, while the government plans to supplement antivirus measures, such as strengthening requirements for negative PCR test results.

Foreigners entering for short-term stays and coming from one of 11 African countries will not be allowed to enter Korea through Jan. 6. The countries include South Africa, Nigeria, Ghana, Zambia, Botswana, Zimbabwe, Namibia, Lesotho, Eswatini (formerly Swaziland), Mozambique and Malawi.

Korean nationals and foreigners with permission to stay of greater than 90 days and arriving from the listed nations may still enter the country, but must isolate for 10 days at a temporary residential facility and receive four PCR tests — before entry, on the first day after entry, on the fifth day after entry and before their release from quarantine.

Direct flights to and from Ethiopia — Korea's only direct air connection with Africa — will be suspended through Jan. 6, reflecting heightened concerns over the new variant.

The government plans to arrange charter flights for Korean nationals wishing to return from Ethiopia.

The government and the Central Disease Control Headquarters announced the decisions in the afternoon on Tuesday after holding a meeting to discuss measures to fight the spread of Omicron.

The country added nine more Omicron cases as of Tuesday midnight, raising the total to 128.