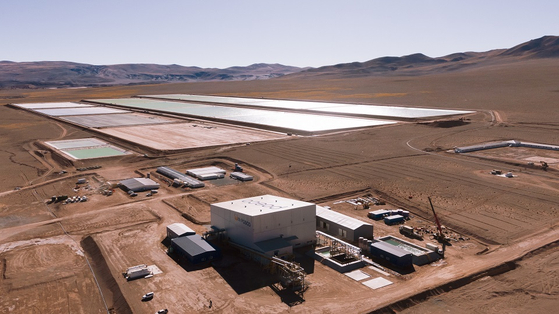 
Posco will invest $830 million to establish a lithium hydroxide plant in Argentina, aiming to be a major supplier of electric vehicle (EV) battery materials.

The company announced Thursday that its board on Dec. 10 approved the plan to build a plant producing lithium hydroxide using material from the Hombre Muerto salt lake in Argentina.

Lithium hydroxide is a core material used to make battery cathodes. The material is preferred over lithium carbonate as it extends battery life.

Posco will buy shares from Posco Argentina to finance the plant.

Construction will start in the first half of next year, and the factory is scheduled for completion in the first half of 2024. Once completed, the plant will have the capacity to manufacture 25,000 tons of lithium hydroxide annually, which the company says is enough to make batteries for 600,000 EVs.

Responding to rising demand of lithium, the company acquired mining rights of the Hombre Muerto salt lake in 2018 from Applecross, Australia-based Galaxy Resources for $280 million. It discovered last year that the lake has 13.5 million tons of lithium reserves, or six times the amount it was projected to have in 2018. Following the discovery, Posco has been operating a small demo plant near the lake, extracting lithium and testing commercial viability ahead of the investment.

Posco may expand the Argentina plant after completion to add another 250,000 tons to the factory's production capacity.

Posco announced Dec. 10 that it will become a holding company, aiming to lead in solid-state battery market and partnering with battery material manufacturers to do so.

The company in May established the Posco Lithium Solution subsidiary and broke ground on a lithium hydroxide-extracting plant in Gwangyang, South Jeolla, which has a production capacity of 43,000 tons per year. It will raise lithium production to 110,000 tons in 2025 and 220,000 tons in 2030.