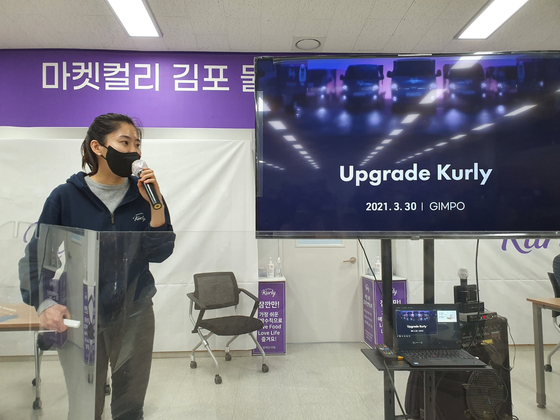 Kurly CEO Sophie Kim speaks at a press event held at its warehouse in Gimpo, Gyeonggi, in March. [JOONGANG ILBO]


Kurly raised 250 billion won ($210 million) in a pre-IPO placement from a Hong Kong-based private equity firm ahead of domestic listing scheduled for next year.

Kurly, an operator of e-commerce app Market Kurly, said on Monday the funding from Anchor Equity Partners gives it a corporate valuation of 4 trillion won.

The company initiated service in 2015 and specializes in the dawn delivery of groceries. It plans to go public as a Kospi company in the first half of next year.

Kurly said it will use the pre-IPO placement to improve service technologies and logistics and data infrastructure and hiring new employees to expand product categories and attract new customers.

Kurly estimates its corporate valuation at 7 trillion won once it goes public.

The figure was calculated by multiplying its estimated 2022 sales by 2.5 times, a multiple used by Coupang when it listed on the New York Stock Exchange in March, said Kurly.

Kurly has received more than 900 billion won in funding since establishment. Its investors include DST Global and Sequoia Capital China.

"Delivering fresh agricultural products at an affordable price by early morning may be a great service to customers, but the profit margin of the business model is low," warns Lim Chae-un, a professor of marketing at Sogang University. "An e-commerce company should sell something else to its customers it obtained through the retail service. Market Kurly lacks that diversity of business models."

Kurly focuses on dawn delivery, and it currently does not have plan to launch services beyond that, the company said.

Kurly's potential rivals also include traditional retailers like Lotte Mart and Homeplus, which are shortening delivery times for grocery orders as the online shopping market grows.

Lim added that maintaining the stock price after it goes public will be important for Kurly. Coupang's stock price collapsed after its offering in New York and is currently trading below its offering price.

The listing of other domestic e-commerce companies next year -- SSG.com and Oasis -- is only projected to intensify the cutthroat competition.

"Competitiveness of each of the company that files for an IPO will be strengthened from the injection of funds," said Jung Yeon-sung, a business professor at Dankook University. "But the IPOs will definitely intensify the e-commerce competition because their earnings and business strategies will be directly evaluated by shareholders, who may not wait patiently for the companies to swing to profit."