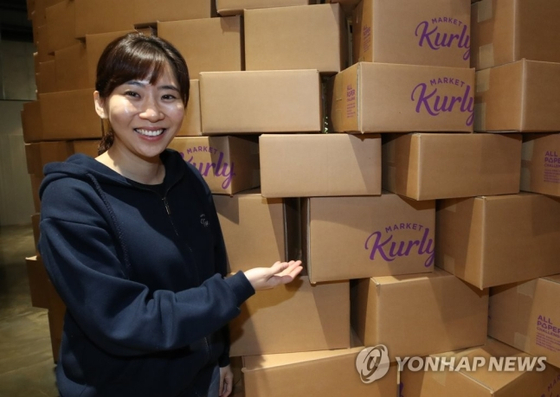 Market Kurly CEO and founder Sophie Kim at a press event held in October to promote the use of environmentally-friendly packaging for deliveries. The e-commerce operator recently secured a $163 million investment. [YONHAP]


The recent investment arrived as investor sentiment has broadly withered following the coronavirus outbreak, although many tech companies have reported a jump in business as more consumers take their purchasing online.

Market Kurly received the investments through a Series E funding round led by DST Global and several others, including Hillhouse Capital, Sequoia Capital China and Fuse Venture Partners.
DST Global is an investment company that funds late-stage, web-based ventures.

It is the largest investment secured by Market Kurly since the service launched in 2015.

Over the past five years, it has secured a total of 420 billion won.

Market Kurly plans to spend the investment on advancing logistics systems, expanding its customer base and recruiting new talent.

The company's sales last year reached 428.9 billion won, up 173 percent on-year. Its annuals sales since 2015 had grown by 350 percent in average since the business was established.

“The latest investment is an achievement made possible thanks to investors who believed in Market Kurly in difficult times, as well as customers who trusted us and employees who made the service possible,” said Market Kurly founder and CEO Sophie Kim in a statement. “We will do our best to enhance Market Kurly service and lead the growth of online shopping both in terms of quantity and quality to be able to repay the trust from customers and provide such service in the long term.”

Market Kurly is well known for having first adopted an early-morning delivery service.