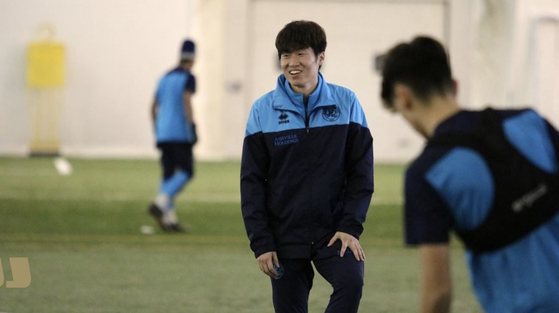 Park Ji-sung works with players in the U-16 team at the Queens Park Rangers training ground in London. [QUEENS PARK RANGERS]


Former Manchester United and Queens Park Rangers star Park Ji-sung has returned to the London club to coach the U-16 squad as part of his professional coaching training.

QPR announced on Saturday that Park, who joined the club in 2012, has joined the coaching staff as part of his B License training under Head of Coaching Chris Ramsey.

“Having played for QPR I am really interested to see how they develop their younger players," Park was quoted as saying by QPR. “I have learnt lots from the players as well as the coaches.”

Park became the first Korean to play in the Premier League when he joined Manchester United in 2005. After seven years with the club he moved to QPR, playing one season in London before being loaned out when the club was demoted to the second tier. Park retired a year later.

Since leaving the pitch, Park has taken a number of administrative and advisory roles, including remaining an ambassador for Manchester United, directing youth development for the Korea Football Association and advising K League 1 club Jeonbuk Hyundai Motors.

The B License is the second tier license under UEFA and qualifies coaches to train different age categories from youth teams to amateur senior teams and to take an assistant coaching position at a professional club. A year after completing the B License, coaches can work towards the A License, which allows them to be the head coach of a youth team, the reserve team of a top flight club or any second-tier club.

The A License is followed by the Pro License, the highest level of coaching certification available in Europe, which permits a coach to manage a professional top-tier club on a permanent basis.

"It has surprised me how much I have learnt," Park said. "It is not just about your skill or ability, it is about your mentality too. People might think being a coach is quite similar to being a player. For me, I have realized it is totally different. It is not just about tactics, it is everything – leadership, communication, how you can influence every single player.”

Park also mentioned that football administration needs improving in Korea, perhaps indicating that he would consider coaching here rather than in Britain.

“When I look at Asia or South Korea, administration needs improving compared to Europe and I will look that way,” he said.