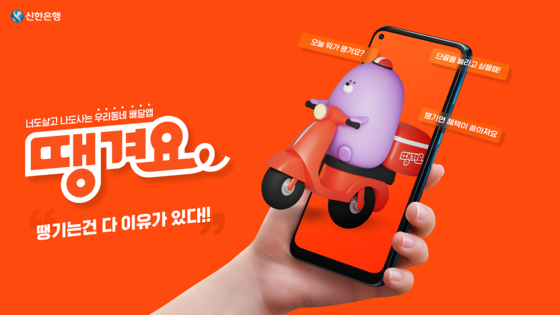 
Shinhan Bank, one of Korea's largest banks, is now in the food delivery business.

It is the first local financial company to offer a service of this kind, the company said Wednesday.

While financial institutions aren't permitted to provide food delivery under current laws, largely due to its irrelevance to the finance, the bank obtained a time-bound approval to test the business from the Financial Services Commission last year under the so-called regulatory sandbox program.

According to a Shinhan Bank spokesperson, the approval can last a maximum of four years, but the period can be extended if related laws and regulations change.

The lender will be providing the app and supporting financial and technological infrastructure to connect customers to eating establishments, but will not be hiring riders or making food.

Shinhan Bank's app is called Ttaenggyeoyo in Korean, which means "to pull," but in many contexts means "craving."

The bank said its platform does not charge business operators fees for listing or fees for advertisement, and charges only 2 percent on orders, a low in the business.

The bank said it will also offer same-day settlement of most payments to businesses at no additional cost.

The app can be downloaded for Android devices through Google Play. Currently, the delivery service is available in only six districts in Seoul -- Gwangjin District, Gwanak District, Mapo District, Gangnam Disctrict, Seocho District and Songpa District. The available districts are mostly in southern Seoul.

The app will become available to iOS users and residents in other districts at a later time, the bank said.

"We are focusing on establishing a win-win strategy for all participants on our platform, rather than generating profit," the bank said in a statement.

From Jan. 14, the service will go live and taken out of beta test mode.