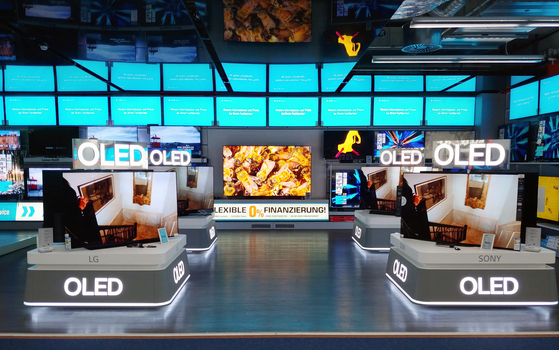 If the deal goes through, that will be the first time that the world’s largest TV maker has used OLED panels, a high-end panel type with better contrast than LCDs, manufactured by LG Display, 37.9 percent owned by Samsung's rival LG Electronics.

“LG Display is set to supply LCD and OLED panels in a deal worth 3 trillion won annually to Samsung Electronics beginning next year,” said Jeff Kim, an analyst at KB Securities, in a report, raising the display maker’s target price to 28,000 won from 25,000 won.

The analyst predicted that Samsung Electronics is already on track for the product development of OLED TVs using LG Display’s panels.

“As of December 2021, [Samsung Electronics] is expected to have already completed product development and planning for OLED TVs, for which LG Display’s WOLED panels are likely to be employed, indicating that the rollout (in North America and Europe) is likely to be in the first half of 2022,” the analyst wrote in the report.

WOLED refers to OLED panels that use white OLED layers.

Both Samsung Electronics and LG Display declined to comment about the possible deal.

The speculation surfaced earlier this month on the assumption that the new OLED panels manufactured by Samsung Display won’t likely be sufficient for Samsung Electronics' needs, given that it only started mass-producing large-sized OLED panels last month.

The OLED panels produced by Samsung Display — dubbed QD Display — deploy a blue OLED layer as a light source and a color filter consisting of quantum dots to enhance luminance.

“Given Samsung Display’s limited QD-OLED panel capacity, a partnership between LG Display and Samsung Electronics for large-sized OLED panels is likely to continue for more than three years,” Kim predicted.

Multiple local media outlets speculated that the electronics maker will debut OLED lines at the CES 2022 trade show in Las Vegas next month, although a spokesperson at Samsung Electronics denied the speculation.

“Neither the QD-OLED nor WOLED TVs will be introduced at CES,” the spokesperson said. “But the issue might be covered during the press briefing at the event.”