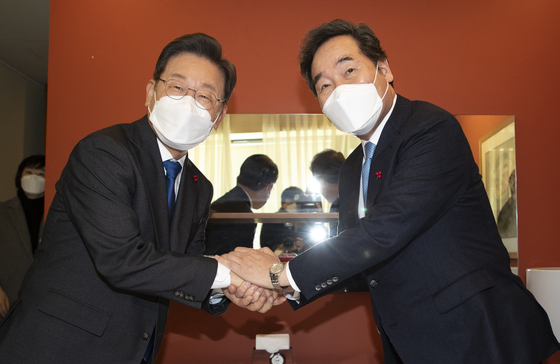 The two held an 80-minute luncheon meeting at a restaurant in central Seoul, their first encounter in 51 days since the launch of the DP's election campaign.

During their lunch, Candidate Lee said to the former DP chairman, "I am lacking in many ways, so I hope you will be able to look out for me," in a push for a one-team campaign.

He added that "there are many mountains to overcome" and asked the former DP chief to help share the burden. Lee Nak-yon, who had been runner-up in the party's primaries in October and had been reluctant so far to take on a more active role in the campaign, agreed in turn.

In a joint press briefing after their meeting, candidate Lee said to reporters, "Former Chairman Lee has played many roles in the DP's victory until now."

The former Gyeonggi governor said he expects Lee Nak-yon to "officially take part" in necessary areas for the DP's election campaign ahead of the March 9 presidential election and "help me out a lot in areas in which I might be lacking."

Lee Nak-yon said, "The candidate and I decided to work together for a DP victory."

He said, "In future activities, I may sometimes say things that differ from the candidate and the party," but added that candidate Lee agreed to this.

DP Rep. Yoon Young-chan, who took part in the luncheon meeting, told reporters that the new national vision and integration committee will focus on setting an agenda for overcoming Covid-19, alleviating societal polarization, welfare, political reform, peace on the Korean Peninsula, national integration and detail tasks in the next government. Further appointments to the committee will be announced next week.

Lee Nak-yon initially rejected the results of the race after he came just shy of a shot at a runoff against Lee Jae-myung, who scraped by with a majority and was named the party's presidential candidate on Oct. 10. After appealing the primary results and questioning the vote count calculation method, Lee Nak-yon finally conceded his defeat four days later.

The two Lees last sat for a teatime meeting on Oct. 24 in Insa-dong, central Seoul, where the former prime minister pledged to aid the candidate's campaign for an election victory.

The former DP chief assumed the role of standing adviser to the campaign. However, he has until now shied away from taking a more assertive role in the DP's campaign.

Lee Nak-yon taking on a more visible role in the campaign is expected to appeal to voters from the Homan region, comprised of South and North Jeolla provinces and Gwangju, a weak spot for the candidate amid a close race against the main opposition People Power Party's (PPP) presidential candidate Yoon Suk-yeol. The former prime minister is a native of South Jeolla and also served as the province's governor.

DP Rep. Oh Young-hun said the Lees' meeting was meant "not only contribute to the unity of party members and supporters, but also to the unity of all people who are concerned about the livelihood and future of the country."

The DP also said it plans to reinstate candidates that left the party next month. It came to such a discussion in a supreme council meeting Wednesday. From the beginning of the month, it will be accepting applications for reinstatement through Jan. 15, and appears to be a part of measures to unite liberal factions ahead of next year's election.