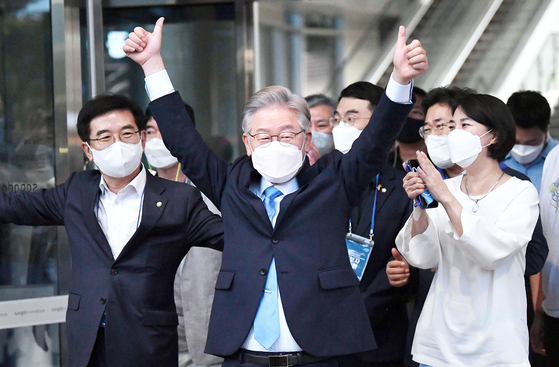 
Gyeonggi Gov. Lee Jae-myung just got closer to securing the ruling Democratic Party's (DP) ticket for next year's presidential election after winning a majority of votes in the party's second "super week."

Gov. Lee, the DP's frontrunner presidential contender, accumulated a total of 54.9 percent of the ballots, or 545,537 votes, cast through Sunday, the second super week in the DP primaries.

He was trailed by former Prime Minister Lee Nak-yon at an accumulated 34.3 percent, or 341,076 votes, widening the gap between the two rivaling presidential contenders by over 200,000 votes, or 20.57 percentage points. They were followed distantly by former Justice Minister Choo Mi-ae with 9.1 percent and DP Rep. Park Yong-jin with 1.6 percent.

Gov. Lee looks to be on track to win his party's ticket for the March 9 presidential election without a run-off vote. He has so far won the majority in regional primaries and the first and second electoral college votes open to the public and general party members.

The DP kicked off its 11-leg regional primaries on Sept. 25 and the first super week covered the Chungcheong, Daegu-North Gyeongsang and Gangwon regions.

Gov. Lee furthered widened his lead by winning 58.17 percent, or 172,237 votes out of 296,114 electoral votes cast, announced Sunday as the four candidates gathered at the Songdo Convensia in Incheon during the second super week. Lee Nak-yon followed at 33.48 percent, Choo Mi-ae at 9.26 percent and DP Rep. Park Yong-jin at 1.41 percent in the second electoral votes.

Gov. Lee also led in the regional primary vote in Incheon, the ninth leg of the DP primaries.

The third and final super week will see ballots cast on Saturday in Gyeonggi, the governor's home turf, and in Seoul on Sunday, wrapping up the DP's primary race. The party will announce the results of the third electoral college votes the same day.

If Gov. Lee wins a majority of the votes, he will be nominated as the DP's candidate in the race's final leg on Oct. 10. If he fails to secure the threshold, Lee will face a run-off vote against the runner-up.

Lee is estimated to have to win around 750,000 more votes to skip run-offs.

His continued popularity comes despite a widening Daejang-dong land development scandal in Seongnam, Gyeonggi, during his time as the city's mayor in 2015.

Lee received approval from 28.3 percent of peopled surveyed, while Yoon received an even 28 percent. Hong Joon-pyo, a five-term PPP lawmaker, followed at 16.7 percent and Lee Na-kyon at 11.9 percent.

The poll was conducted nationwide on 1,006 adults aged 18 and over on Friday and Saturday.