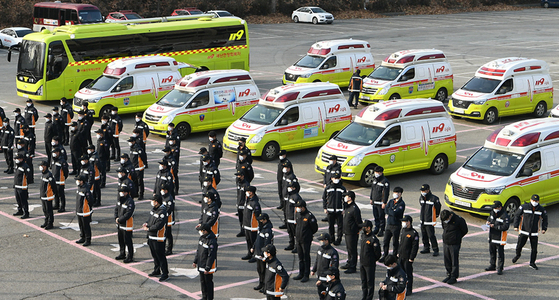 Paramedics and ambulances from eight provinces and cities are assembled at Jamsil Sports Complex Fire House in Songpa District, southern Seoul, on Thursday to be used for transferring Covid-19 patients in Seoul. [NEWS1]


Critical Covid-19 cases and related deaths in Korea both hit new highs on Thursday as the government started ordering over 200 virus patients hospitalized longer than 20 days out of their intensive care unit (I.C.U.) to free space for new arrivals.

According to the Korea Disease Control and Prevention Agency (KDCA), the number of Covid-19 patients in critical condition rose by 20 from the previous day and reached 1,083 as of Wednesday midnight.

This is the third straight day for the country’s critically ill patients to stay above 1,000, soaring once again to a record-high since the pandemic started on Jan. 20, 2020.

One-hundred and nine more people died of the virus on Thursday, bringing the death toll to 5,015.

This is also the first time for the country to see more than 100 deaths in a day.

However, contrary to the record-high numbers of critical cases and deaths, the country’s daily new Covid-19 cases showed a slight decrease from last week’s figure.

Although coronavirus figures tend to peak on Wednesdays or Thursdays as more tests are conducted during the weekdays, the figure went down by 537 from the previous day and dropped below the 7,000-mark. Compared to last Thursday’s figure, this is a decrease of 700, or 9.2 percent.

Health authorities believe the virus surge has started to slow down thanks to the strengthened distancing rules.

“We believe this is due to the increase in booster shots and strengthened public health measures from Dec. 6,” he said.

Around 26.7 percent of Korea’s 52 million people have received a booster dose of a Covid-19 vaccine as of Wednesday midnight, according to KDCA data, mostly consisting of those 60 years old or older. A total of 64.9 percent of this age group have been jabbed with a third shot.

To curb the virus resurgence sparked from the country’s “Living with Covid-19” scheme, from Dec. 6, a cap in social gatherings was set at six people in Seoul, Gyeonggi and Incheon, and eight elsewhere. The government also expanded vaccine pass requirements to cover more establishments including restaurants and cafes.

But seeing as the virus's spread was not subsiding, the government adopted even stricter social distancing rules from Dec. 18, limiting the number of people allowed in gatherings to four nationwide and imposing a business curfew on restaurants and cafes for 9 p.m.

Son, however, noted Thursday’s decrease in cases is “too early to view as an effect of stricter distancing rules of Dec. 18.” 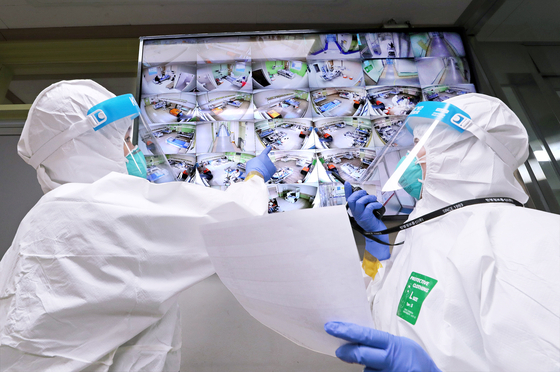 Medical staff look at a monitor showing the intensive care units for Covid-19 patients at the Catholic University of Korea Daejeon St. Mary's Hospital in Daejeon on Thursday. [YONHAP]

According to the Health Ministry, 79.1 percent of I.C.U. beds across the country were occupied as of 5 p.m. Wednesday, with 279 out of 1,337 beds available. The figure was down by 2.3 percentage points from a week ago, but still surpassed the 75-percent-saturation point warned of by the government.

“It would take around four to five days for the reduced number of new infections and elderly patients to help lead a decrease in critically ill-patients and ease the operation rate of intensive care unit beds,” Son said, noting such an effect is likely to show around next week.

Amid hospital beds being inundated with admissions, the government announced Wednesday it will add around 10,000 hospital beds for Covid-19 patients by mid-January, adding that it designated more public and private hospitals to clear out all patients but Covid patients.

Health authorities said Thursday that it had issued an order to 210 Covid-19 patients who have been being treated for more than 20 days to leave the I.C.U.

Up until Wednesday, 71 of such long-term patients had moved to other hospitals or hospitals beds, and 18 are awaiting to be transferred. Another 63 are waiting to be evaluated for adequacy for more intensive care, the authorities said.

Under current guidelines, Covid-19 patients can be admitted to Covid-I.C.U.s for up to 20 days after showing virus symptoms. After that, they will be released and be transferred to other hospital beds. Those who refuse will have to cover their own costs for the Covid-19 treatment.

Health official Son said such rules don’t mean an “end of treatment” but rather a “release from isolation,” saying the patients will be transferred from Covid-I.C.U.s to non-Covid-I.C.Us or other hospital beds as their likelihood of transmitting the virus to others is decreased.

Meanwhile, the government is speeding up efforts to procure oral Covid-19 treatments, which are believed to be a game changer in treating the disease.

Following the United States Food and Drug Administration (FDA)’s emergency use authorization for Pfizer's Paxlovid the day before, the government said Thursday that Korea is currently “under negotiation” for purchasing more pills of Paxlovid in addition to its contract for 70,000 courses.

“Since oral treatments do not require injections, they are believed to be very useful for patients treated at home […] and may be used for treating high risk, mild and moderate patients,” Kim Ok-soo, head of the resource management team at the Central Disease Control Headquarters, said in a briefing Thursday.

Korea's Ministry of Food and Drug Safety also announced Wednesday that it began reviewing emergency approval of Paxlovid, which will likely last until the end of this month, Kim said.