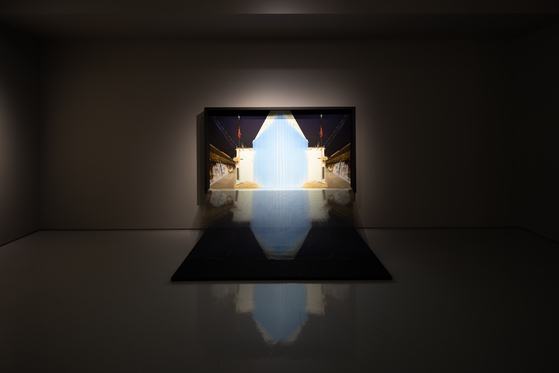 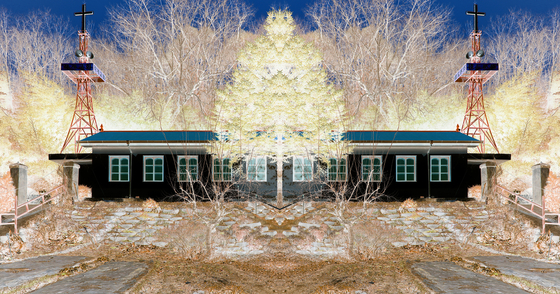 
Cho Duck-hyun, 64, is known for visual non-fiction novels with photo-realistic pencil and charcoal drawings based on black-and-white photos taken decades — or even a century — ago. In his new solo show, he ups the ante with painting-like photography in addition to the photo-like drawings.

The solo exhibition titled "mirrorscape" started earlier this month at the Museum of Photography, Seoul (MoPS), located in Songpa District, southeastern Seoul. "In this exhibition, the mirror is a key device and a keyword," the museum said in a statement.

Among the works on view, "Uchronia" features photographs that look like surrealistic paintings of perfectly symmetrical mystic buildings reminiscent of religious temples. They are actually negative images of abandoned or lonely buildings in small provincial cities, each of them mirrored to achieve symmetry reminiscent of Rorschach art.


"I took the photos in provincial cities and towns under redevelopment or in danger of becoming ghost towns due to Korea's rapid aging and concentration of people in the capital area," the artist told the Korea JoongAng Daily. "Mirroring their negatives resulted in unimagined images, which gave the shabby buildings mystic ambience and unexpected dignity." 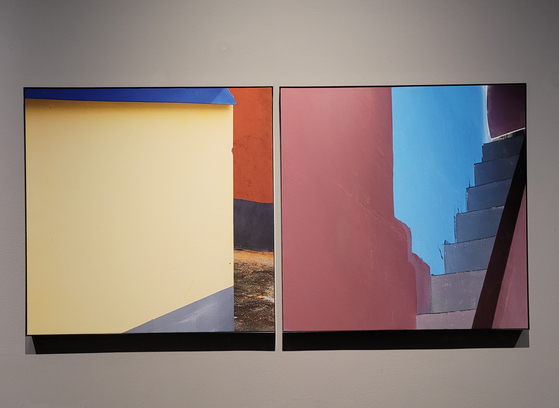 
The exhibition includes positive and negative photographic images that resemble colorful abstract paintings. The artist took the photos in the almost-deserted provincial cities.

The artist's signature photo-like pencil and charcoal works based on images from the meseum's Korean modern and contemporary photography collection are also on display, including one drawn from a photograph of Prince Yi U (1912-45), one of the last members of the Joseon dynasty's royal family.

"Photo-like pictures and picture-like photos face each other," the museum said in the statement. "This is a visualization in space of the infinite interaction of opposing images, such as the past and the present, light and dark, existence and fiction, which the artist has worked on so far, and eventually the exhibition 'mirrorscape' becomes a work of art in itself."

The exhibition runs through Feb. 19.