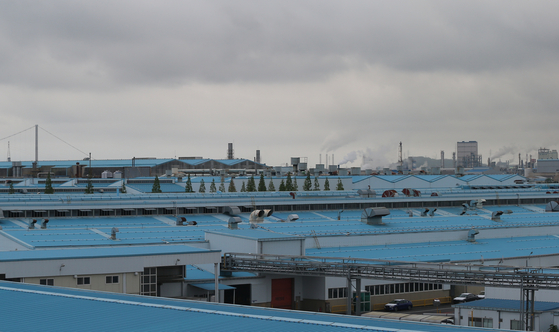 Hyundai Motor's Ulsan factory halted operation in May due to the global auto chip shortage. [YONHAP]

Automakers are coming up with survival plans to endure persistent chip shortages.

They are taking the manufacturing of auto chips in house or pushing for partnerships with chipmakers to minimize disruptions. Korean carmakers have been advised to change the way they order semiconductors.

According to a Korea Automotive Technology Institute report Monday, orders for auto chips next year have already exceeded manufacturing capacity by 20 to 30 percent, and some of the orders have been pushed to 2023.

Lead time for semiconductors is now 23.3 weeks. Lead time indicates to the time gap between when the order is placed and when it is delivered.

"Automakers, acknowledging the importance of semiconductors, are shifting how they source their chips by collaborating and internalizing the manufacturing capacity," the report said.

"Ford, for example, is vertically integrating the auto chip supply chain by strategically partnering with GlobalFoundries."

GlobalFoundries is a multinational chip contract manufacturer based in Santa Clara, California.

General Motors is also opting for partnerships with chipmakers.

Last month, it announced it will co-develop chips with several producers, including NXP and Qualcomm.

Other strategies include manufacturing auto chips on their own.

Hyundai Motor, Toyota, Tesla and Volkswagen have hinted at plans to develop auto chips themselves to reduce their reliance on chipmakers.

The report recommended carmakers and parts makers in Korea change the way they order chips.

"Korean companies have maintained their way of making short-term orders, for example on a three-month basis, while other major global companies place long-term orders on a one-year basis," the report said.

"Unlike other auto parts, semiconductor companies prioritize those who make orders first. As a result, Korean companies also need to make changes in their way of placing by making long-term orders based on demand forecasts and manufacturing plans."

The automotive semiconductors supply crunch, which started in 2020, hit the global auto industry this year, leading many carmakers to temporarily shut their factories.

It disrupted production of some 1.4 million vehicles in the first quarter, followed by another 2.6 million in the second quarter, according to market tracker IHS Markit.

IHS believes the supply crunch will continue until the latter half of 2023.