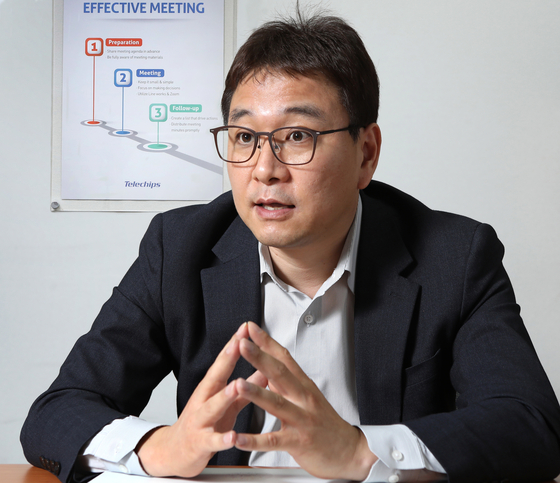 Stanley Kim, Vice President of sales at Telechips, is interviewed at the company's headquarters in Songpa District, southern Seoul, on April 14. [PARK SANG-MOON]


A tiny, obscure car component called a microcontroller is at the center of a global chip shortage.

Telechips, a Seoul-based automotive chip producer, recently released a microcontroller manufactured by Samsung Electronics. It's hoping to make hay on the supply crunch.

Its selling point lies is a more advanced fabrication process and a lower price than offered by NXP, Infineon and Renesas, which together control 50 percent of the market, according to market tracker Omdia.


Taiwanese semiconductor manufacturer TSMC is the real behemoth in the game, contract-manufacturing microcontrollers for NXP and Renessas. All told, it makes 70 percent of the auto industry’s microcontrollers.

“Most of mainstream microcontrollers are based on 8-inch silicon wafers and use node sizes in the 40 nanometer range,” said Stanley Kim, Vice President of sales at Telechips, "while Telechips selected 12-inch wafers and 28 nanometer node.

“This means we could have a better yield rate and functionality than competitors,” he said in an interview with the Korea Joongang Daily. The smaller the node size, the higher the performance offered by a chip, and less energy is used too.

Telechips' main products are application processors used in in-vehicle infotainment systems. It has a 12 percent market share for that kind of chip globally. It entered the microcontroller market two years ago to diversify its revenues.

“We started developing automotive microcontrollers two years ago and released sample products this year,” Kim said. He acknowledged that the timing of the company's new product line is “favorable.”

“We’ve received positive responses from car parts companies at home and abroad,” he said, although he declined to reveal any names.

For its mainstay infotainment chip, Telechips is trying to integrate more features onto a single chipset. Demand is surging as a huge number of electric vehicles and autonomous driving cars are expected to roll out in coming years, which are likely to use more sophisticated chips.

“Previous generation cars would have instrument clusters, navigation and audio systems powered by separate chips,” Kim said, “But now we’ve come up with a so-called cockpit chip that is capable of operating them all together under our Dolphin brand series.”

The company’s sales of those chips are mostly to Korean carmakers Hyundai Motor and Kia Motors -- at 65 percent. Telechips is hoping to diversify its customer base.

“While we keep on supplying domestic clients, we plan to bolster our presence abroad, especially in Europe,” he said.
Telechips managed to win orders from European automobile companies including Audi, Volkswagen and Daimler after it set up a subsidiary in Europe in 2018.

Japan is its second largest market and customers include Nissan, Toyota, Honda and Mitsubishi.

To further widen its product range, the company is developing chips for automated driver assistance systems.

The new chip is expected to be released next year.