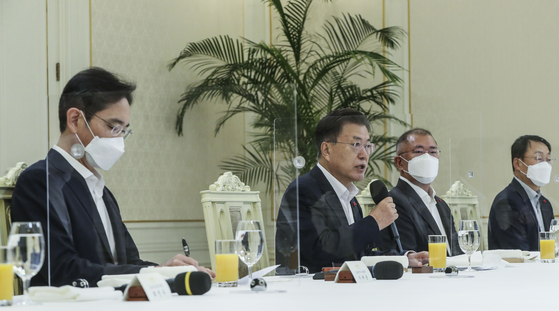 
President Moon Jae-in’s call for closer cooperation between Samsung Electronics and Hyundai Motor in automotive chips is raising expectations of a coming together of the country’s two largest conglomerates in the face of a dire global shortage of car chips.

The president told the chiefs of the two companies on Monday that “it would be great if Samsung and Hyundai Motor had closer business ties in the automobile and semiconductor sectors.”

The government already launched a council designed to bring together the two companies and smaller chip and parts suppliers, dovetailing with its separate push to broaden Korea's semiconductor industry beyond memory chips.

Both Samsung Electronics and Hyundai Motor declined to comment about any potential partnership.

“There’s nothing we can say about the deal,” a spokesperson at Hyundai Motor said. "Even if there was, we can’t tell given the mandate of keeping it confidential

Samsung Electronics supplies memory chips to Hyundai Motor on a small scale while key chips such as microcontrollers and processors supporting in-vehicle infotainment and driver assistance system are primarily provided by NXP, Infineon and Renesas.
“The current contract size [between Samsung Electronics and Hyundai Motor] is really marginal since memory chips are only used in navigation systems for some car models in small quantities,” said a source at Hyundai Mobis, a parts affiliate of the automaker.

The remarks came as the chipmaker looks to strengthen its line-up of automotive chips, an effort to extend its dominance in memory chips to a broader range of semiconductor products.

Automotive chips are expected to enjoy robust demand in the coming years as major carmakers like Mercedes-Benz, Ford, GM and Toyota plan to ramp up production of electric vehicles that require more high-performing chips.

While the two companies remained tight-lipped about any future cooperation, investors were already betting big on the idea.

Shares of local automotive chip producers that could benefit from the potential cooperation jumped on Tuesday.

Telechips, a Seoul based automotive chip producer that also participates in the government-led council, rose by 3.17 percent to 17,900 won ($15), its highest level since July 8.

Putting aside any deal, the focus on car chips is a clear ambition for Samsung as the company indicated in an investment announcement in May.

The tech giant committed 171 trillion won to ramp up production of so-called non-memory chips by 2030, an attempt to reduce its dependence on memory chips.

Non-memory chips cover automobile chips, central processing units for computers, application processors for smartphones and camera sensors. Samsung is also expanding its foundry business, or making chips on contract based on the designs from customers.

That represents an additional investment of 38 trillion won compared to plans announced in 2019.
“Samsung Electronics has gradually expanded production of high-performing automotive chips,” said a source from a semiconductor packaging company that works for Samsung.

“And it will likely go further next year as it jumps into producing a wider range of car chips including power management integrated circuit (PMIC) chips,” the source said.

Chaebol heads look to bounce back with bold plans for 2021